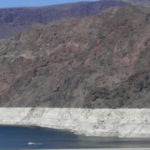 In his thought-provoking keynote address at the Colorado River Water Users’ Association (CRWUA) Annual Conference, Challenged, but Unbroken: Sustaining the Colorado River, David Modeer, general manager of the Central Arizona Project and president of CRWUA, shared his life lessons and how they apply to developing a solution to current challenges faced by the Colorado River.

A video presentation prior to Modeer’s keynote highlighted the challenges: drought, structural deficit, population growth and climate change, as well as long time horizons for physical solutions, like seawater desalination.  But with projections that Lake Mead could fall below 1,000 feet in the next 4 to 8 years, there is an imminent need to address these challenges.

The heart of Modeer’s speech focused on his work in Tucson after the city’s first attempt to use Colorado River water in the late 1990’s was deemed a failure due to public dissatisfaction with high mineral content in the water.  He paraphrased Jerry Garcia saying, “It was a long, strange trip” to describe his transition from American Water Works Company in Pennsylvania to Tucson, where the public had become hostile toward the water department.

The solution was to engage the community, listen to them, address their concerns.  He maintains that these same solutions apply to meeting the challenges on the Colorado River.

A theme of the need for cooperation has emerged in discussions about management of the Colorado River.  Modeer kept with that theme, saying that no party on the river can focus on maintaining their own position; if they do, they won’t solve the problem.

Modeer also spoke of fairness, fostering tolerance through the sharing of perspectives and experiences, and our nation’s trend of developing creative solutions among diverse interests—including the development of the nation from a diverse group of colonies and our collaboration with other nations to achieve victory in World War I and World War II.