Consolidated Water Company (CWCO) stock price is now 19.4% above its expected price, reflecting a recent price decline after the company announced 2nd quarter earnings material below 2014.  The stock had been on an upward trend thanks to the bump in its stock price in mid-March following an SEC 8k filing stating that it has found an equity partner for a 100,000-AF desalination plant at Rosarito Beach.  It also stated that it anticipates entering into a definitive agreement with the State of Baja by February 2016.  Consolidated Water’s price now stands 1.2% above its level 52 weeks ago.  The stock price is running 3% below its 10-week exponential moving average. 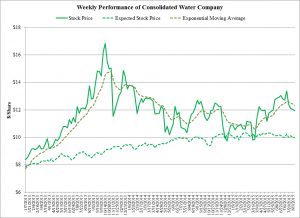