Cadiz (CDZI) stock price turned down again over the past month.  The earlier rebound was in response to an announced lease of lands in the Cadiz Valley to Water Asset Management who paid $12 million for a land lease and negotiated the lease of 7,500 acres at a price of $43 million.  The price still remains below the level before the release of a letter dated October 2, 2015 by the Bureau of Land Management determining that the Cadiz Project is not within the scope of the Arizona-California Railroad right-of-way over federal lands. If the determination stands, BLM believes that the Cadiz Project would need BLM approval for a right-of-way over federal lands for the project’s water conveyance pipeline. (For background on the BLM determination, see “BLM Determines that Cadiz Project Needs Federal Approval,” JOW October 2015).

The price now stands 60.0% below the price 52 weeks ago (when its price fluctuated above $10/share) and 55.5% below its expected price. The stock price is 84% of its 10-week exponential moving average. Prior to the lease announcement, the price had moved up on the news that the company had rolled over its debt with creditors. 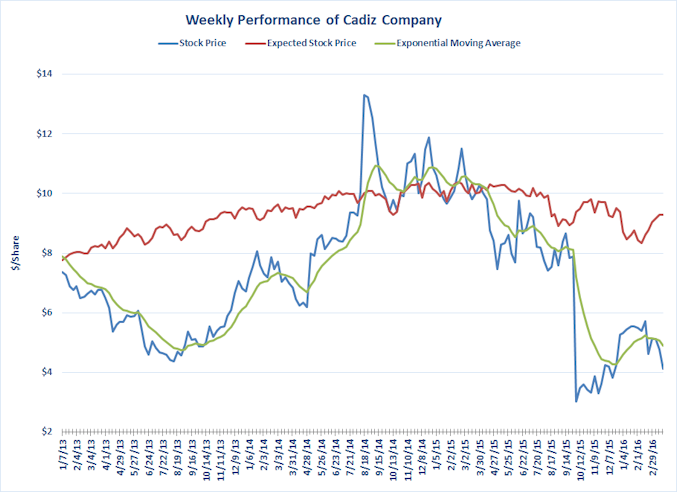 PICO Holdings (PICO) stock price has finally turned around with the reorganization of its board. The price now stands 58.5% below its expected price. The company is suffering losses in its three major business segments: water resources and storage, agribusiness and real estate. PICO’s price has declined by 42.3% over the past 52 weeks.  A price turnaround last April, which proved temporary, may have been prompted by the announcement that the firm has retained an investment banker to monetize its investment in Northstar (canola operations), one of the sources of operating losses. The price is 7% above the 10-week exponential moving average. How far will the stock turnaround? 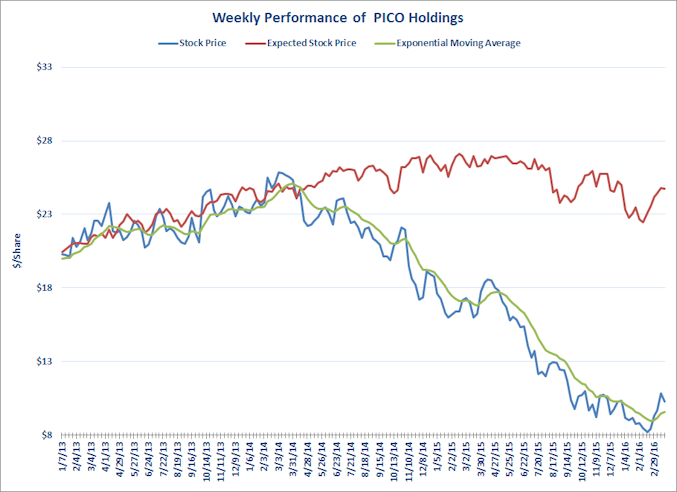