Comments from EPA, Others Lead to BDCP Revisions 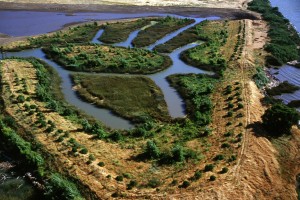 In late August, opponents of the Bay Delta Conservation Plan (BDCP), a controversial $24.7 billion water infrastructure and habitat protection project plan, scored at least a temporary victory.  The Department of Water Resources and other state and federal agencies in charge of the project announced that they would revise and rerelease drafts of the three key documents that define the project: the Plan itself, the Environmental Impact Report (EIR), and the Implementing Agreement.  The announcement came a month after the close of a public comment period that attracted vehement criticism of the plan, which has twin goals of building two 30-mile tunnels to divert water from upstream of the Delta, and restoring 150,000 acres of wildlife habitat.  The tunnels in particular have generated pushback from environmental groups, lawmakers, and other stakeholders.

The timing of the announcement also coincided with the release of the EPA’s comments on the draft EIR.  EPA raised several serious concerns about the plan.  Most notably, EPA identified two potential violations of the Clean Water Act.  First, “operating any of the proposed conveyance facilities…would contribute to increased and persistent violations of water quality standards in the Delta, set under the Clean Water Act, measured by electrical conductivity (EC) and chlorine concentrations.”  Second, the BDCP Conservation Measure 1 “would not protect beneficial uses for aquatic life, thereby violating the Clean Water Act.”  While the Clean Water Act implications have received the most attention, the agency had several other comments as well, including the EIR’s failure to fully explore alternative designs, and the lack of consideration of the project’s effects on downstream waters like San Francisco Bay or upstream portions of the Delta.

According to the Sacramento Bee, BDCP leaders say the EPA comments were not the only factor that led to the delay.  The project was criticized on many fronts during the comment period.  To illustrate the range of issues in question, the San Diego County Water Authority raised financing concerns, while the North State Water Alliance claimed there was inadequate consideration of climate-related flow changes. As Journal of Water reported earlier in the summer, other groups have raised endangered species, National Environmental Policy Act, and over-extraction concerns.  The BDCP also has enemies in Congress, as evidenced by a bill filed early in September by California Congressmen Ami Bera, Jerry McNerney, and John Garamendi that aims to prevent federal funding to the project.

The exact scope of the announced revisions has not yet been made public.  However, it seems safe to say that the next months seem to be a critical time for the BDCP, as it attempts to overcome these significant challenges.