Drought likely to persist or develop in the Southwest, Southeastern U.S. this winter 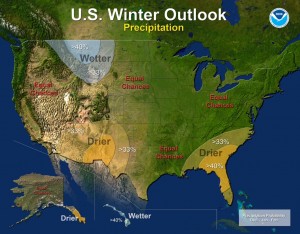 Winter is likely to offer little relief to the drought-stricken U.S. Southwest, and drought is likely to develop across parts of the Southeast as below-average precipitation is favored in these areas of the country, according to NOAA’s annual Winter Outlook announced today.

Drought has been an ongoing concern across parts of the Southwest and Texas for nearly three years, and after some relief during the past few months, drought is likely to redevelop during winter.

Sea surface temperatures across the equatorial Pacific have been near average since spring 2012, and forecasters expect that to continue through the winter. This means that neither El Niño nor La Niña is expected to influence the climate during the upcoming winter.

“It’s a challenge to produce a long-term winter forecast without the climate pattern of an El Niño or a La Niña in place out in the Pacific because those climate patterns often strongly influence winter temperature and precipitation here in the United States,” said Mike Halpert, acting director of NOAA’s Climate Prediction Center. “Without this strong seasonal influence, winter weather is often affected by short-term climate patterns, such as the Arctic Oscillation, that are not predictable beyond a week or two. So it’s important to pay attention to your local daily weather forecast throughout the winter.”