When the Texas legislature passed the Edwards Aquifer Authority Act in 1993 establishing the Edwards Aquifer Authority (“EAA”) to manage the aquifer and setting a pumping cap (which was increased by SB 3 in 2007), a tradable commodity was born.  Water withdrawn from the aquifer must remain in the boundaries of the EAA, but permits may be permanently transferred or leased among permit holders.  Though, irrigators are limited to leasing no more than 50% of their permitted rights.

Prices for permanent transfers of Edwards Aquifer pumping permits climbed dramatically through 2006, when they reached $5,000/AF.  Since then, prices worked their way to about $5,500/AF, where they steadily remain.

In contrast, prices for leases of permitted withdrawals have moved only slightly over time, ranging from $100/AF to $140/AF—save for a jump to $218/AF in 2008, which was driven by a very high priced lease of industrial water.  Without that transfer, the average price that year would have been $134/AF. 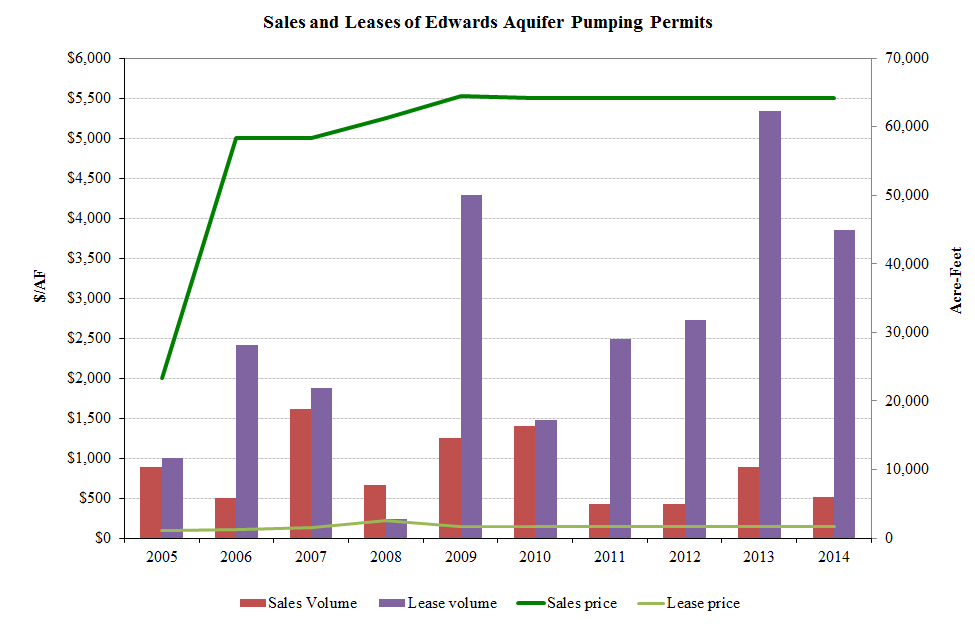 When viewed from a year-to-year perspective, the volumes for both permanent transfers and leases appear volatile, but when looking over time, it is clear that recent years have had more permanent transfers and fewer leases than early years.  This trend is counterintuitive given the recent entrance of the Voluntary Irrigation Suspension Program Option (“VISPO”) and EAA’s Aquifer Storage and Recovery Leasing Program (“ASR Leasing Program”) as lessees.  Both programs are part of the Edwards Aquifer Habitat Conservation Plan finalized in 2012.