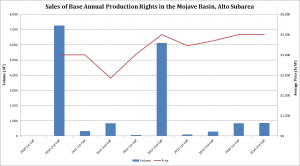 The volume of leases of FPA and carryover water in the Alto subarea tends to fluctuate:  high in the first half of the year and low in the second half.  Because the Mojave Basin Watermaster operates on a fiscal year, the short-term transfers approved in the first half of the calendar year may reflect efforts to prepare for the new watermaster year.

Trends have remained consistent for both sales and leases since the market began, so expect more of the same.

[1] Prior to the sale to Hesperia, this BAP right was transferred from the original owner to a bank due to foreclosure. Because the transfer to the bank was not a market transaction, it was excluded from the analysis.