In the first five years following entry of the judgment, the total BAP in each subarea was ramped down from 100% to 80%, and each year the watermaster evaluates conditions and determines if further ramp down is needed. The ramped down annual supply is allocated to the producers as Free Production Allowances (“FPA”). FPA specifies the amount of groundwater that a holder can pump without incurring a replenishment obligation. In 2016, FPA ranged from 45% of BAP to 80% of BAP, depending on the subarea. In the Alto Subarea, it was set at 80% for agricultural users and 60% for municipal and industrial users.

Unused FPA can be carried over to the following year. Both FPA and carryover water can be transferred to another water user, who can use it to meet a replenishment obligation or to increase their allowed pumping for that year. While transfers of BAP, FPA and carryover water occur in all five subareas, the markets are the most robust in the Alto subarea, which includes most of Southern California’s high desert communities.

Generally, the volume of BAP rights traded is small, with spikes in volume driven by the occasional large transaction. There were no BAP sales in the Alto Subarea in the first half of 2017. This followed especially low activity in 2016, when 12 AF traded in the second half of the year, and 85 AF traded in the first half of the year. (see sales chart).

After generally trending upward since the inception of the market, prices have been sitting around $5,000/AF, but dropped to $4,300/AF in the second half of 2016. When sales resume, will prices remain at the lower point? 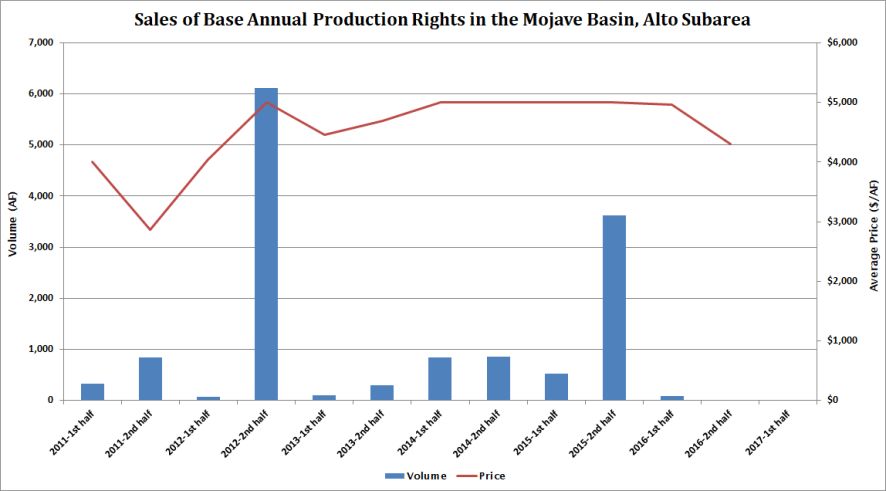 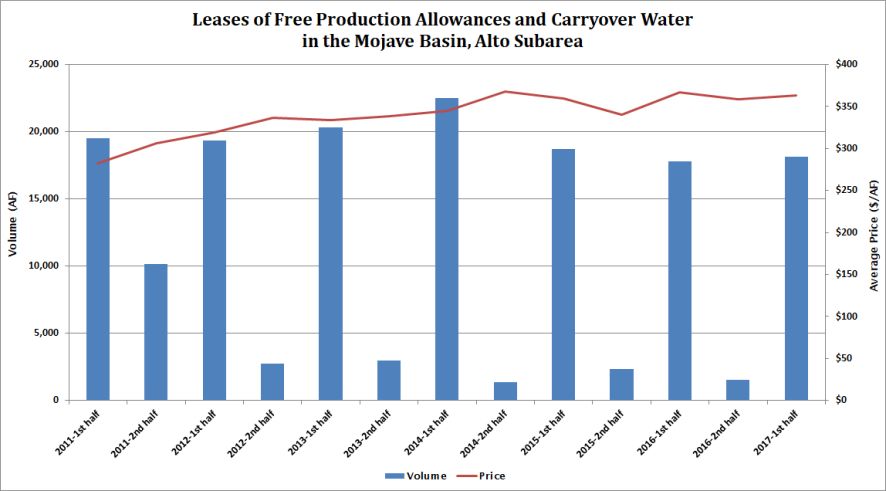 The average prices for leases of FPA trended upward from the inception of the market through the second half of 2014, when they reached a peak of $368/AF. Since then, they have been fluctuating near $360/AF. In the first half of 2017, prices were at $363/AF.