On Water Conservation and Water Rates

Water providers throughout the West find themselves between a trend and a hard spot: (i) increased emphasis on water conservation and variable water demands, versus (ii) financial solvency.  The conflict arises because the delivery of water requires extensive investment in infrastructure (storage, wells, pipelines, canals, treatment and distribution).  Normally, these infrastructure costs are fixed in the sense that they do not vary with the volume of water delivered.  Further, with water conservation and other reasons for reduced water demands on the horizon, the infrastructure once sized for a future of increasing water demands may become overbuilt from the perspective of a “new normal” of lower water demands.

A meaningful public discourse needs a sound conceptual framework.  Below, I use the circumstance of the Metropolitan Water District of Southern California (“MWD”) to illustrate the challenges.  I then present a simple economic model of water rate setting and analyze the consequences of cutbacks in water use (as in drought) and water conservation.  I show that an individual’s economic incentive for water conservation falls significantly as conservation efforts become more widespread.

Illustration of the Challenge 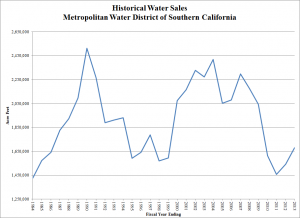 For an individual consumer whose use is minuscule relative to total sales, the water rate measures their cost of water.  Therefore, the incentive for conservation is $3.00/ccf ($1,305/AF).  Of this incentive, $0.60/ccf ($261/AF) represents a reduction in variable costs and $2.40/ccf ($1,044/AF) represents a reduction in the customer’s contribution to fixed costs.  While the reduction in contribution to fixed costs grows with the degree of water conservation, the lost revenue from this individual customer is small (see table below).

While one individual can conserve water and have no material impact on water rates, this is not the case for a group of individuals (see table below).  The case of the individual discussed above is the case of 0% customers conserving.  Note that the water rate remains constant at $3.00/ccf independent of the amount conserved.  Water rates increase with both the amount conserved and the share of customers conserving.  This, of course, illustrates the public discourse about water conservation and water rates.

So, what is the incentive for customers to conserve water if their water rates increase?  They avoid the variable cost component of the water rate plus shift a portion of their financial responsibility for the system’s fixed costs to non-conserving customers.  As the conservation ethic becomes sufficiently widespread, the later gain becomes less significant.  We are down to the variable cost component of water rates.

The same type of problem plagues regulated water utilities.  When setting regulated water rates, public utility commissions will only consider the cost basis of water rights, not their economic value.