The Path to a Water Bond: Voters to Face a Trimmer Water Bond Measure

On Wednesday night, August 13th, the legislature passed and the governor signed legislation to replace the much-maligned $11.14 billion water bond measure with a trimmer one.

The legislation passed with overwhelming support—with Senate voting unanimously in favor of the bill (37-0), and the Assembly passing it with a vote of 77-2. 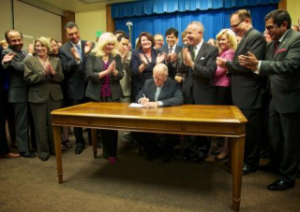 “Water is the lifeblood of any civilization and for California it’s the precondition of healthy rivers, valleys, farms and a strong economy,” said Governor Brown upon signing the bill. “With this water bond, legislators from both parties have affirmed their faith in California’s future.”

The new measure, which has a $7.545 billion price tag to be met by issuing bonds for $7.12 billion and reallocating $425 million in unspent funds from previous bonds, would provide:

This $7.545 billion bond measure grew from a $7.195 billion proposed by Governor Jerry Brown, Assembly Speaker Toni Atkins (D–San Diego) and Senate President pro Tem Darrell Steinberg (D–Sacramento) announced on Monday, August 11th.  This announcement was made in tandem with the governor’s 11th hour signing of a bill to delay for two days the printing and distribution of the ballot pamphlet for the November 4, 2014 general election—making August 13th the new deadline for the legislature transmit a replacement ballot measure to the Secretary of State.

Most chapters were allocated an additional $20 million to $50 million, while flood management saw no increase in allocations between the proposal and the final legislation—but the lion’s share of the $350 million increase went to water storage, which got a $200 million increase.

Funding for water storage was a sticking point for Senate Republicans, who wanted $3 billion allocated to that chapter, and led by Andy Vidak (R–Hartford) and Jim Nielsen (R–Gerber), put forth their own $8.7 billion proposal on August 8th as a counteroffer to the $6 billion proposal touted by the governor in his August 5th letter to voters emphasizing the need for a fiscally responsible water bond.

The water storage allocation was also a priority among agricultural and municipal interests in the southern Central Valley.  On August 7th, a coalition that includes agricultural leaders and city and county representatives from the Central Valley, held a press conference calling for a larger bond than the governor’s proposal.  They wanted an additional $1 billion for water storage projects (for a total of $3 billion) and $2.25 billion for Delta sustainability projects, which they saw as necessary to advance the tunnels project (but likely would have become a sticking point in legislative negotiations because of a call for the bond measure to be “BDCP neutral”).  The group said they will not budge on their call for at least $3 billion for water storage projects and that they would rather keep the $11.14 billion bond measure on the ballot than allow a lean replacement that does not address their concerns.  Members of the group also signed a letter to valley legislators insisting that any replacement bond measure adhere to the policy provisions and language and the statewide focus and spirit of the original measure.  The letter was penned by Manuel Cunha, Jr., Board Member of the California Latino Water Coalition and President of Nisei Farmers League on July 30th and ran in the Fresno Bee on August 10th.

The new $7.545 billion bond measure was considered by the legislature in two identical companion bills, SB 866 and AB 1471, with AB 1471 becoming the final, chaptered bill.

According to the Assembly floor analysis for both bills, the measure “tries to be neutral with regard to the BDCP” because it does not include a separate chapter for Delta Sustainability, which means Delta ecosystem projects, like any other ecosystem projects in the state, would have to apply for funding under the watershed protection chapter; and the bill includes specific policy guidance and parameters for Delta projects.  BDCP neutrality is an important concept because the controversy over the BDCP.

Before the bills were taken up by either legislative chamber, the San Diego County Water Authority issued a statement supporting the new measure.

“Governor Brown, Speaker Atkins and Pro Tem Steinberg are to be congratulated for undertaking the grueling work necessary to craft the right water bond that is also right for our times and the state’s finances,” said Thomas V. Wornham, Chair of the Water Authority’s Board of Directors. “We thank Speaker Atkins and all of our San Diego County legislators for their diligence in ensuring our region’s water supply and priorities are met by this measure.”

Support and call for action on the water bond was also offered by a long and distinguished list of agricultural, water, environmental, labor and business leaders on August 12th when the governor met with them to discuss the bond, while issues were still under negotiation in the legislature to get the necessary bipartisan support.

Among the flurry of activity that ensued after the governor announced his proposal in the first week of August, a coalition composed of Friends of the River, the League of Women Voters of California, Planning and Conservation League and Sierra Club California join the conversation by trying to offer their own $6 billion proposal that would have allocated $1 billion for clean and safe drinking water, $1.5 billion for regional self-sufficiency (including conservation, efficiency, water recycling, and capture and reuse of storm water and runoff), $1.1 billion for watershed protection and water quality, and $2.4 billion for groundwater cleanup and management.

While the dust has settled for legislative activity, campaign activity will be starting up shortly.  But it may be a losing game.  The Hydrowonk Blog completed an analysis of voting on water bonds and the high debt levels in California.  In an August 2013 post, Hydrowonk showed that an $11.14 billion water bond would have a 12.2% probability of securing voter approval and odds against passage of 7:1.  In a post on July 3, 2014, Hydrowonk considered a $6 billion water bond and found that the smaller size only slightly improves a water bond’s chance at the ballot box.  A $6 billion would have 20% probability of securing voter approval and odds against passage of 4:1.  Hydrowonk is working on a similar analysis for the $7.545 billion bond.  Keep an eye on the Hydrowonk Blog for the outcome.