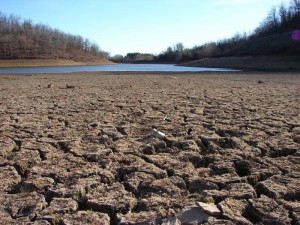 Water conservation is a hot topic across the western United States.  In California, cities are about a third of the way toward meeting the 20% water use reduction goal that Governor Jerry Brown set earlier this year, according to the California State Water Resources Control Board.  Some cities, however, have had to take much more drastic action as their water supplies dipped dangerously low, and one community has seen its wells run dry.

In March of this year, the City of Montague, CA announced that it might run out of water before the end of the summer.  A combination of factors, including low snowmelt, a recent settlement requiring the release of 2,250 acre-feet for salmon habitat, and the need for extra water to compensate for sending water through dry canals to service the city, threatened to overwhelm the city’s reservoir capacity.  As of September 9, though, the City proclaimed that it “will not run out of water and will not need to haul water from Yreka,” which had been the worst-case scenario backup plan.

Montague seems to have avoided catastrophe for now by taking a series of strong actions.  The city reduced its water consumption by two thirds this summer by imposing strict water limits on its residents: fines were levied against households that used more than 5,000 gallons of water in a month (later increased to 7,000 gallons in July and August), with additional fines for higher usage.  For comparison, Santa Rosa residents, according to the Sacramento Bee some of the most water-frugal in the state, average 106 gallons per person each day, or over 12,000 gallons every month for a family of four.  In Folsom, near Sacramento, residents use 329 gallons per person each day, which amounts to nearly 10,000 gallons per month.

In addition to extreme conservation, Montague explored unconventional options. It began using a product called WaterSavr, a powder made of lime and palm oil, which is designed to slow evaporation from standing bodies of water by creating a filmy barrier on the surface.  The product, which is NSF certified, claims to reduce evaporation by up to 35%.

Ultimately, though, Montague’s solution came in a more familiar form: a 3-mile pipeline. The city secure expedited approval and capital funding from the state, and plans to complete the project this fall. The city will release water into the river, either from Lake Shastina or from a well, and then pump it out further downstream, bypassing the highly inefficient canal that normally brings water to the town.  The city anticipates that this will resolve the water crisis for the foreseeable future.

Wichita Falls, TX is also taking extreme action, having declared a Stage 5 Drought Catastrophe, its most severe classification.  Like Montague, the city has imposed strict water conservation measures, but it has done so through strict limitations on certain activities, such as an outright ban on irrigation with city water, rather than caps on total usage.

Wichita Falls has also experimented with WaterSavr, though the city’s drought plan considers this an unpredictable and secondary mitigation strategy.   Over the summer, workers applied almost 6,000 pounds of WaterSavr to Wichita Falls’ Lake Arrowhead every three days, at the cost of $400,000.  While evidence indicates that the product works less effectively on larger bodies of water, even a 10% evaporation reduction could save millions of gallons each day, according to the Texas Tribune.

The focus of Wichita Falls’ current efforts is its Direct Potable Reuse Project (DPR), which recycles wastewater. The extensive treatment process takes the output from the city’s wastewater treatment plant, passes it through microfiltration and reverse osmosis treatments, and then blends it with untreated lake water before going through the normal drinking water treatment system.  The $13 million project now provides 5 million gallons of water daily, meeting one third of the city’s demand.  Within 2-3 years, the city could expand this system to pump up to 10 million gallons of treated wastewater each day into Lake Arrowhead.

While Montague and Wichita Falls demonstrate that city water agencies can mitigate shortages through creative action, some rural California residents are living in the worst-case scenario, as their wells have gone dry.  According to the Fresno Bee, Tulare County officials distributed bottled drinking water to roughly 1,000 East Porterville residents who were otherwise without water.  Residents have been filling up containers of non-potable water from a tanker truck provided by the fire department.  So far, this is a problem limited to rural areas with shallow wells, but with no end to the drought in sight, more communities may have to try novel techniques to avoid a similar fate.