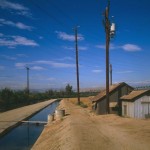 Late August 2014, the United States Geological Survey (USGS) released its 2010 California water use estimate, the latest in the series of 5-year reports it has compiled since 1950. This installment was slated to be released later in 2014, but it was published early to satisfy increased interest in water use prompted by the drought.

Finally, the USGS report provides a county-by-county breakdown of the data, demonstrating the variety of sourcing and usage across the state.  For instance: