California’s April 1st Snow Report made national news.  Governor Brown attended a manual reading at the Phillips snow course at 6,800 feet in the Sierra Nevada that showed no snow readings for the first time in 75 years of readings in early April.  Electronic readings show that snow pack was at 5% of normal levels statewide, ranging between a low of 3% of normal in the North Coast and Sacramento regions to a high of 7% and 9%, respectively, in the South Lahontan and North Lahontan regions (see table).

Snowpack traditionally peaks in April before it starts melting providing runoff for the state’s reservoirs and water supplies for the summer and fall months.  The 5% of normal snowpack for April 2015 is only one-fifth of the 25% of normal snowpack last year.  In normal years, runoff from snowpack accounts for about 30% of surface water supplies.  In its press release, DWR states, “California’s historically wettest winter months have already passed and the drought is now firmly rooted in its fourth consecutive year.”

Will DWR maintain its current 20% State Water Project Allocation announced on March 2nd?  The odds are not favorable.

Precipitation in March was minor (see chart “Northern Sierra 8 Station Precipitation Index for Water Year 2014-2015, Year to Date”).  The storms in early February (that bumped DWR’s announced SWP Allocation in March) are in the distant past.  Along with the amount of water in storage in Lake Oroville at the beginning of the water year, precipitation for the water year through April is a key driver of final SWP allocations. 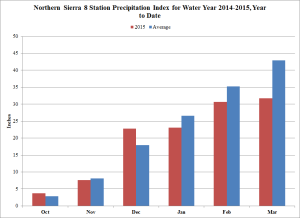 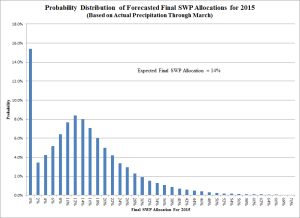 There are two factors to keep one’s eye on as we wait for the Department of Water Resources determination of the Final SWP Allocation for 2015.

What will Mother Nature provide in April?  Will precipitation follow the beneficence of February or the harshness of March?  What will be the balance between the needs of man and the environment?