On March 2, 2015, California’s Department of Water Resources (“DWR”) announced an increase in the 2015 SWP allocation from 15% to 20%.  In increasing the SWP Allocation from the mid-January announcement of 15%, DWR noted that storms in early February were responsible for the increased 2015 SWP Allocation.

DWR’s declared 2015 SWP allocations are being adjusted in response to storm events.  DWR’s initial 2015 SWP Allocation, announced on December 1, 2014, was 10%.  The increase to 15% in mid-January reflected mid-December storms that increased river flows.  According to DWR, “tight coordination among federal and state water and wildlife-protection agencies allowed the SWP to store runoff south of the Sacramento-San Joaquin Delta without violating statutory and regulatory obligations to protect wildlife and water quality.” 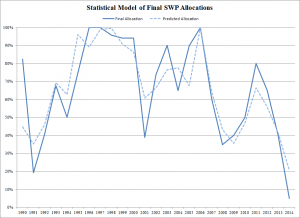 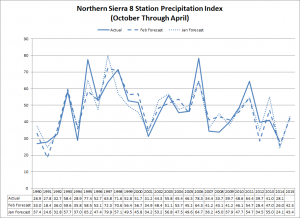 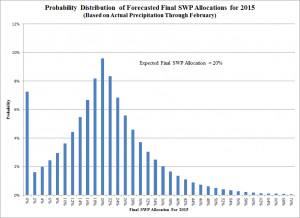 There are two factors to keep one’s eye on as we wait for the Department of Water Resources determination of the Final SWP Allocation for 2015.

Second, there are man-made actions.  Will the trend decline of 3 percentage points per year for the Final SWP Allocation adequately capture reduced allocations from regulatory constraints?