Cadiz (CDZI) stock price has increased over the past month but still stands 11.5% below its expected price.  The recent price increase may be driven by the announcement of a joint venture with a technology firm to treat Chromium 6 (see “Cadiz Water Project Meets Critical Milestone with Innovative CR-6 Treatment Technology” in this issue).  This price increase comes on the heels of a significant price decline last Spring following a report stating that the Cadiz Project has failed federal environmental review and Metropolitan Water District of Southern California not seeing how the project could be built.

The price now stands 19.3% below the price 52 weeks ago (when its price fluctuating above $9/share).   Despite the recent price recovery, the stock price is 3% below its 10-week exponential moving average. 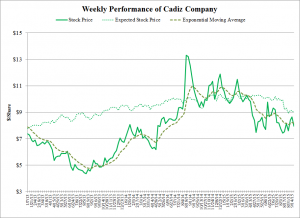 Cadiz (CDZI) price leaped in August 2014 with issuance of a court ruling dismissing all challenges to the project based on the alleged inadequacy of environmental review.  The price had started declining in March 2014 when Business Week published a one-sided article about opposition to Cadiz’s Project.

PICO Holdings (PICO) stock price remains in free fall.  The price now stands at 53.4% below its expected price. The company is suffering losses in its three major business segments: water resources and storage, agribusiness and real estate.  PICO’s price has declined by 44.6% over the past 52 weeks.   A recent price turnaround last April, which proved temporary, may have been prompted by the announcement that the firm has retained an investment banker to monetize its investment in Northstar (canola operations), one of the sources of operating losses.  The price is 11% below the 10-week exponential moving average.  Will the free fall in PICO’s price continue? 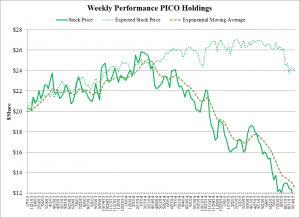