After settling at around $25,000/unit earlier this year, the average price for CBT units eased during the third quarter of this year to about $24,000/unit. Most transactions were completed at prices ranging from $24,500/unit to $25,000/unit, but a large transaction approved in September with a price of $22,000/unit drove the average down. The third quarter last year also saw average prices around $24,000/unit. (See chart) 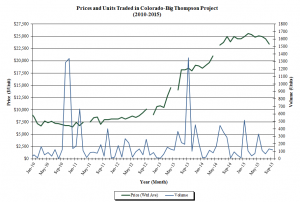 Local water brokers continue to maintain that development and a shift in the demographics of who owns CBT units have tightened the market. Past drought conditions and uncertainty over water supplies may also be playing a role. When the CBT project began operating in 1957, 85% of the units were owned by agricultural water users.  Now agricultural users own less than 1/3 of the units.  In addition, there are now fewer and larger agricultural operations—so the supply is limited to stronger hands that generally do not sell, except for estate settlements and retirement.

With the dip in average price driven heavily by one large transaction, the market may still be settled at the $25,000/unit level. (For more extensive background on the history of the CBT Project, see “Trading Federal Project Water: The Colorado–Big Thompson Project,” WS, October 1990).

Express Your Opinion:
What will average prices of CBT units be in the fourth quarter?