Because the Northern Colorado Water Conservancy District (“Northern Water”) established simple mechanisms to allow trading of Colorado-Big Thompson (“CBT”) Project water, CBT units have been trading widely for nearly 60 years. The CBT Project is a federal water diversion project that brings water from the Colorado River headwaters on the West Slope to the Big-Thompson River, a tributary to the South Platte River, to provide a supplemental source of water to Colorado’s Front Range—supplying 860,000 people and 650,000 acres of irrigated agricultural lands in Northern Colorado. 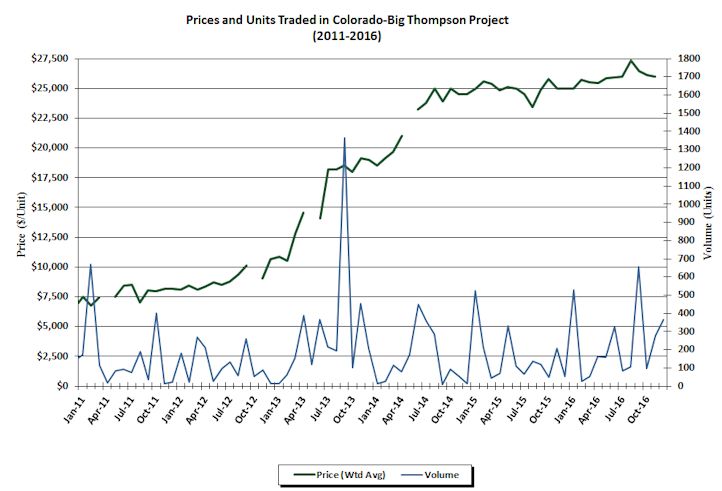 The Northern Water Board of Directors approves transfers of CBT units and sets quotas to determine the yield of each unit. The project has 310,000 units. The board sets an initial quota each November and revisits it the following April. The April quota allows all CBT Project water users to plan for their water supply needs. The board began setting an initial quota in November 2001 to allow municipal and domestic water users access to CBT water in the winter months without incurring a negative balance when the quota is set in April. The board considers both the availability of water and the water needs in the region when it determines the quota. If conditions warrant, the board will announce a supplemental quota. The annual quota has a historic average of 74% (0.74 AF/unit). At its October 2016 meeting, the Northern Water Board of Directors set an initial quota of 50% for the 2017 water year.

Overall, CBT activity has decreased significantly with total annual volumes coming in at one-third to one-half the annual volumes traded in the late 1990s and early 2000s. According to local water brokers, development and a shift in the demographics of who owns CBT units have caused this change in market activity. Past drought conditions and uncertainty over water supplies may also be playing a role. When the CBT project began operating in 1957, 85% of the units were owned by agricultural water users. Now agricultural users own less than one-third of the units. In addition, there are now fewer and larger agricultural operations—so the supply is limited to stronger hands that generally do not sell, except for estate settlements and retirement.