There were no paid transfers of CBT units during the third quarter. Most transfers were dedications to water suppliers in order to receive water service, suggesting a pick up in real estate and development. One transfer completed was an exchange between the City of Loveland and a guest ranch, in which the ranch provided the city with 12 CBT units in exchange for 6 AF of augmentation water. The previous quarter showed average prices ranging from $28,543/unit to $29,603/unit, with individual transactions ranging from $28,300/unit to $30,101/unit. A look into the fourth quarter, which included an auction of units that violated Northern Water’s Storage and Parking Agreement Rule, shows prices running up well above $30,000/unit. (See forthcoming Winter 2019 issue for analysis of the fourth quarter). 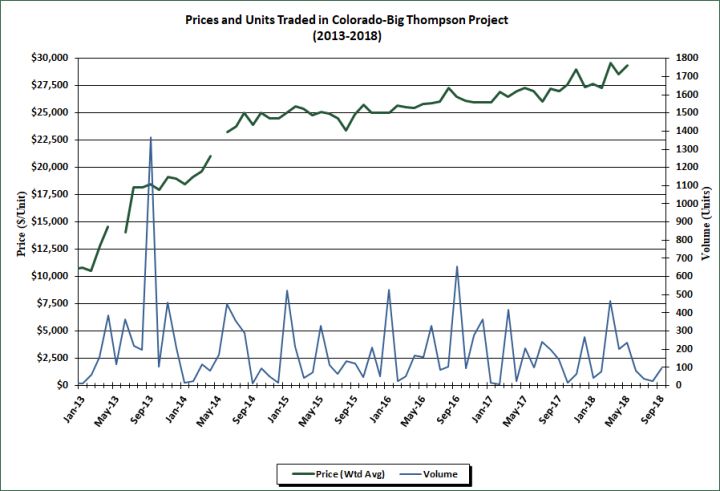 The Northern Water Board of Directors approves transfers of CBT units and sets quotas to determine the yield of each unit. The project has 310,000 units. The board sets an initial quota each November and revisits it the following April. The April quota allows all CBT Project water users to plan for their water supply needs. The board began setting an initial quota in November 2001 to allow municipal and domestic water users access to CBT water in the winter months without incurring a negative balance when the quota is set in April. The board considers both the availability of water and the water needs in the region when it determines the quota. If conditions warrant, the board will announce a supplemental quota. The annual quota has a historic average of 74% (0.74 AF/unit). At its October 2018 meeting, the Northern Water Board of Directors declared an initial quota of 50% effective November 1, 2018.

While there are occasional spikes in volume driven by unusually larger transactions, the overall trend continues to show volume dropping and prices rising.