Watermaster studies have concluded that the Safe Yield for the period 2011 through 2020 is 135,000 ac-ft, or 5,000 ac-ft lower than the Safe Yield set in the 1978 Judgment. A Safe Yield Reset Agreement was submitted to the court, and an April 28, 2017 Court Order related to the Safe Yield Reset accepted the reduced Safe Yield and rejected all other matters. An appeal has been filed related to the other matters, which relate to allocation of unproduced Agricultural Water, allocation of Desalter Replenishment Obligation, and the schedule for the authorized overdraft to offset Desalter Replenishment obligation. Under the revised Safe Yield, the overlying landowners’ rights, which total about 90,000 AF per year, remain unchanged, hence the appropriative rights, also referred to as Operating Safe Yield, are being lowered by 5,000 AF per year. The appropriative rights are allocated in the same proportion as originally set in the 1978 Judgment.

Water market activity generally occurs in the form of annual leases among members of the Appropriative Pool. The watermaster records two additional types of transfers: 1) transfers that are recorded as the manner of utilizing water company shares and 2) exchanges for water from another basin. These administrative transfers, which do not reflect water market conditions, are excluded from JOW’s analysis. 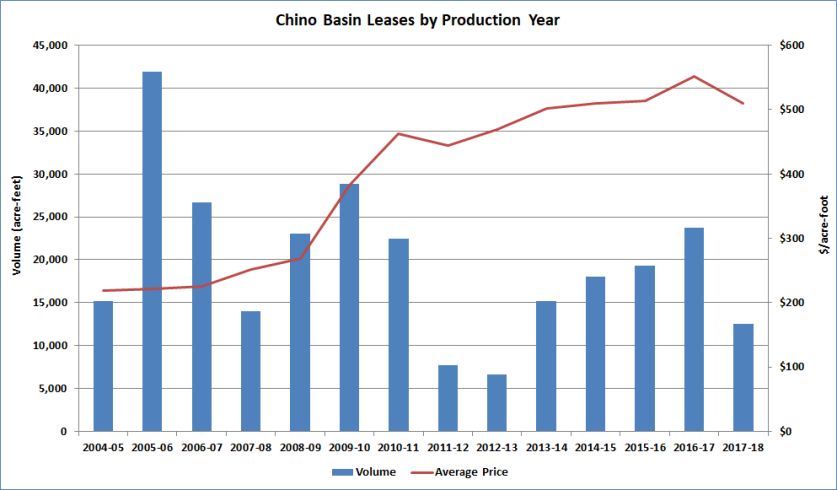 Leasing activity correlates with hydrologic conditions. The years with the three lowest volumes (FY 2007-08, FY 2011-12 and FY 2012-13) were also drought years. Conversely, the years with the two highest volumes (FY 2005-06 and FY 2009-10) were also wetter than normal. 2006 was the last time that the State Water Project provided 100% allocations, and FY 2009-10 saw increased rainfall after the 2007-2009 drought. While FY 2016-17 appears to defy the trend, only one of the 11 transactions occurred before the wet conditions arrived. Hot and dry conditions resumed in 2018, and the leasing activity held true to the trend.

With 2019 seeing wetter conditions—with precipitation levels currently showing no drought within the state according to the U.S. Drought Monitor—expect activity to be higher.