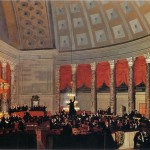 On September 9, the House of Representatives passed H.R. 5078, the “Waters of the United States Regulatory Overreach Protection Act of 2014.”  The bill would prevent the EPA and Army Corps of Engineers from adopting a proposed rule change defining the “waters of the United States,” which determines the scope of the Clean Water Act (CWA).  Additionally, it would bar any revised rule that is “substantially similar” to the current proposal.  Instead, the bill instructs the agencies to go back to the drawing board, writing a new rule with input from state and local governments.

The bill is unlikely to have a significant impact on the current proposal because the White House has threatened to veto it in the unlikely event it passes the Senate.  In a statement, the White House said the bill “would hinder the ongoing rulemaking process.”

The House’s action is the latest in a long string of opposition to the proposal.  The controversy centers on a fear (which the EPA strenuously denies) that the rule will dramatically extend the reach of the Clean Water Act.  This is in large part due to one portion of the proposed definition, the “significant nexus” test.  That portion of the rule would allow the EPA and Army Corps to determine “on a case-specific basis” that waters “have a significant nexus” with other “waters of the United States” and bring them under CWA protection.  Under the proposal’s definition of “significant nexus,” a water body could fall under this category if it “significantly affects the chemical, physical, or biological integrity” of waters already under the scope of the CWA. Despite efforts to limit the scope of the significant nexus test by explicitly excluding certain types of waters from CWA jurisdiction, the potentially expansive application of the test is worrisome to some, particularly agricultural interests.

While the definition of “significant nexus” was developed by the EPA and Army Corps, the test itself comes from the Supreme Court’s ruling in the 2006 case Rapanos v. United States, in which the Court modified the existing definition of “waters of the United States.”  As Water Strategist reported at the time, the case divided the Court and actually yielded three opinions on how the term should be defined. (See WS July/August 2006).

Justice Kennedy, in a concurring opinion, proposed the “significant nexus” test, drawing off the Court’s decision in the 2001 case Solid Waste Agency of Northern Cook County v. Army Corps of Engineers.  Under this standard, waters that “significantly affect the chemical, physical, and biological integrity of other covered waters more readily understood as ‘navigable’” can fall under CWA protection.  This standard differed from the four-justice conservative bloc, which opted to narrowly constructing “waters of the United States” as “relatively permanent, standing or continuously flowing bodies of water,” and the four-justice liberal bloc, which defended the existing expansive definition used by the Army Corps.

Even though it did not garner support from the rest of the Court, Justice Kennedy’s standard became the controlling opinion and is the basis for the proposed rule.

While the House bill is unlikely to be much of a speed bump in the rule’s development, conflict over the definition runs deep.