It’s not the cost of the water itself 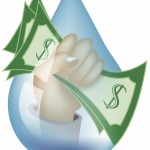 An article published in the Texas Tribune on February 10th, discusses the cases of two Texas cities, Wichita Falls and Fort Worth.

Wichita Falls is contemplating a rate increase in order to afford debt service obligations and infrastructure improvements after significant demand reduction lead to $4.5 million in lost revenues.  Increasing rates under these circumstances is something of a political hot potato, though.

“It’s tough to tell the consumer that ‘Yeah, well, you guys did a great job out there conserving water, but lo and behold, we got hurt financially, so we’ve got to raise your rates,’” said Wichita Falls Assistant City Manager Jim Dockery.

Fort Worth saw a downgrade in its credit rating when it lost $11 million in revenue due to conservation.  According to a February 18th report by WFAA, the Dallas-area ABC affiliate, Fort Worth, which has a two-day-per-week watering restriction in place, is contemplating whether to make the water restriction permanent and is poised for another rate hike (after already raising rates last fall).

Both Wichita Falls and Fort Worth are also considering whether to implement a rate structure that includes a fixed cost component.

In reply to Texas Tribune article, an reporter at the Dallas Observer blogged on February 19th asking, “Is water conservation really bankrupting Texas cities, or are they just bad at planning?”

In her post, the author cites environmentalists who argue that the need to increase water rates is really tied to increased costs because water supplies are short and ultimately concluded that while water rates do need to increase, water for basic needs should remain affordable, and those using larger volumes should carry the burden of cost.

This argument does appease the rudimentary supply-and-demand model of pricing and hits at the heart of the values water utilities must balance—how to keep water, which arguably is a basic human right, affordable and yet priced equitably under a user-pays system.  However, it fails to acknowledge that the costs are not the cost of the water itself—but the costs to treat and deliver the commodity.

Pat Mulroy, former general manager of the Southern Nevada Water Authority, touched on this argument in her swan-song interview:

…it’s happening everywhere in the United States. I can’t tell you how many of my peers are going through the exact same community discussions. Because you are not paying for the water itself. You are paying for very expensive infrastructure that delivers it to you.

That’s my favorite response to somebody who yells at me that water is a basic human right. I say, “You’re right. Here’s your bucket. Go down to Lake Mead and knock yourself out. Take as much as you want.” What you don’t have a basic right to is that somebody treats it to a standard that assures your health and delivers it to your house to where when you turn the tap on it comes out…

In an opinion article published on February 19th, Texas State Representative Bill Callegari sums it up by stating that we don’t value water as a scarce commodity, but we should.  He proposes using rate structures such as water budgets or tiered rate structures.  Under a water budget rate structure households pay a flat rate for a basic amount of water and a higher rate for anything above that basic amount.  Callegari likens this type of structure to paying for cable.  Under a tiered rate structure, the consumer pays for each unit of water used—but the incremental price for each unit increases as use increases.

Also on February 19th, an associate professor of environmental economics policy at the University of California, Riverside (UCR) announced the results of study showing that block-rate water budget, which are known to help utilities maintain a fiscal balance despite fluctuations in use, also encourage customers to conserve.

The issues of rate structures and utility revenues are further explored by the advocacy group, Ceres, and the research organization, Pacific Institute.

Ceres published a paper in August 2013 examining the impact of rate structure on revenue stability—and, therefore, on credit health.  The paper provides metrics that market analysts can use to assess risk (or resilience to demand changes).  The authors acknowledge that there is a mismatch between the fixed cost of providing water service and a rate system that provides revenues based on the volume of water provided.  As consumers change their behavior, revenues become unstable.  They find that stability can be achieved through pricing structure, but “there is no one-size-fits-all solution to pricing for drinking water services.”  There are other factors mostly related to the characteristics of the area served that can cause wide variation in the revenue volatility risk among communities with similar rate structures.

Pacific Institute published a white paper, An Overview of the “New Normal” and Water Rate Basics, and an accompanying series of briefs, Need to Know: Water Rates as a primer on the issues and effective rate-making.  The authors begin with the premise that things have changed and the “new normal” faced by water service suppliers includes unreliable water supplies, legislation and regulatory policies that require conservation, and increased transportation and infrastructure costs. They study various rate structures and the characteristics of the “new normal” with the goal of providing water managers necessary information to set rates that account for conservation pricing and affordability.