Between 2009 and early 2011, water supplies were abundant, so the watermaster was able to provide full allocations (4 AF/acre), and during flood operations at the Falcon and Amistad Dams, the Rio Grande Watermaster provided “free water” that does not count against contractor’s accounts.  As a result, leasing activity for irrigation water was sparse during that time.  But with a change in hydrology, activity peaked in the fourth quarter 2012, totaling 51,183 AF for just that quarter. 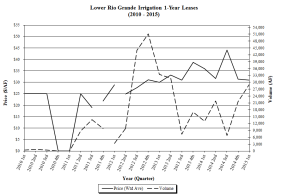 With heavy rains and flooding in the region this spring, expect leasing activity and prices to drop in the short term.  But as dry conditions return expect activity and prices to return to a high level, especially if Mexico continues amassing a water debt under the Rio Grande Compact. (For more on Mexico’s failure to satisfy its obligation to provide an average of 350,000 AF per year over five-year cycles, along with discussion of a potential solution, see “Texas Laments Unreliable Water Deliveries from Mexico,” Rodney T. Smith, Hydrowonk Blog, February 11, 2015.)