Between 2009 and early 2011, water supplies were abundant, and the watermaster could provide full allocations (4 AF/acre), and during flood operations at the Falcon and Amistad Dams, the Rio Grande Watermaster provided “free water,” which does not count against contractors’ accounts. As a result, leasing activity for irrigation water was sparse during that time.

Record-breaking rainfall and flooding in the spring of 2015 led to a similar situation depressing leasing activity for 2015. The low level of activity continued in 2016, when the March-to-May rainfall totaled 200% to 300% of average for much of the valley. Only 10,359.84 AF of irrigation water changed hands over the year—less than 10% of the annual volume for 2012, the highest year on record. Summer of 2017 was hot and dry in the Rio Grande Valley, with above-average temperatures. Thunderstorms in July and August brought limited precipitation, while September saw precipitation vary widely, with some areas receiving near normal totals and other areas getting 10% to 30% of normal.  Overall, trading continues to pick up. 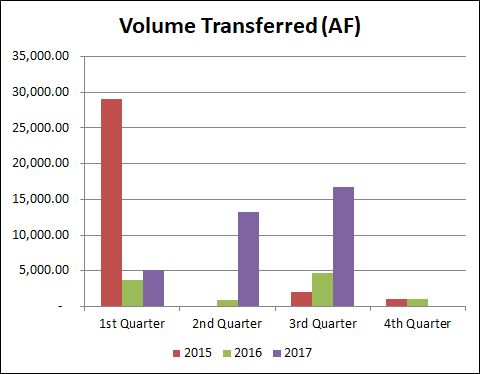 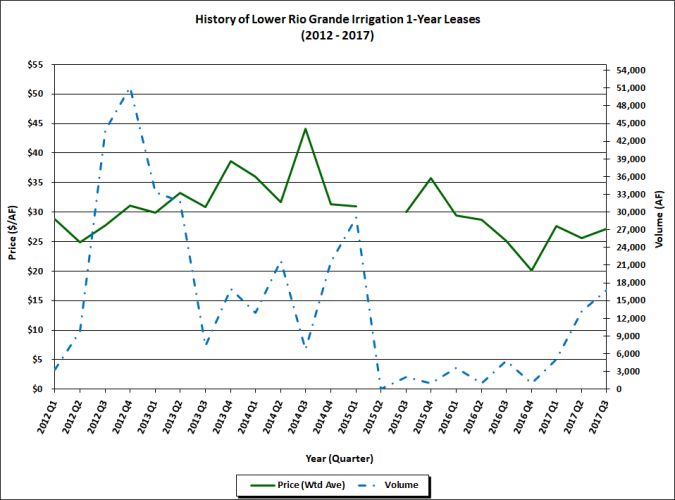 Because municipal users have priority in the system, the market for leases of municipal water is usually thin. In the third quarter 2017, there was an unusually large amount of municipal activity with 11 transfers totaling 3,780 AF. Prices ranged from $14.40/AF to $65/AF, with an average price of $44.19/AF.

Activity for industrial use and mining is also limited. The third quarter saw two leases of 20 AF for mining purposes at prices of $250/AF.

The Lower Rio Grande Valley saw unusually hot temperatures during the spring and summer, and precipitation events brought less-than-normal rainfall amounts in most areas. Forecasters expect cooler and wetter weather for the fall, but are uncertain about how conditions are sizing up for the winter. Expect activity to ease in the short term.