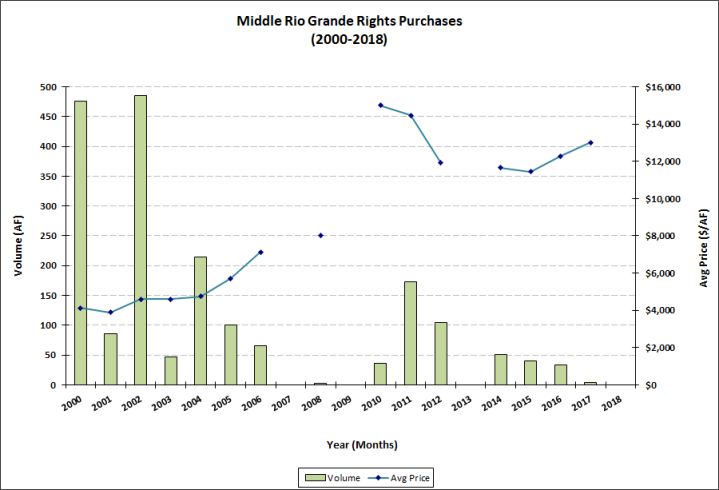 Pre-1907 Middle Rio Grande surface water rights were purchased at administratively set prices between 1982 and 1994.  In 1995, the City of Albuquerque was the primary entity acquiring municipal water rights for their area, but because the state engineer ordered a moratorium on dedications, the process through which rights were transferred to the city, the city had no acquisitions that year.  Acquisitions resumed in 1996 under a policy that allowed its negotiators to offer market-driven prices.

Because of a policy focusing on development of alternative supplies, ABCWUA does not anticipate any further purchases of pre-1907 Middle Rio Grande surface water rights.

In September 2016, ABCWUA’s governing board approved a 100-year water plan, Water 2120: Securing Our Water Future. The plan calls for alternative supply strategies, such as optimizing existing supplies and capturing stormwater, rather than continuing acquisitions of pre-1907 water rights. However, the City of Rio Rancho is entering the market and is offering higher prices than ABCWUA. In order to meet the terms of one of its water rights permits, Rio Rancho must acquire 728 AF in every five-year period to offset depletions from groundwater pumping. In addition, the city finds that aggressive acquisition provides a greater level of flexibility for managing its water resources. Rio Rancho had one purchase of 74.592 AF in 2018 at price of $15,000/AF (see “City of Rio Rancho Buys Water Rights to Meet Permit Obligations” in this this issue for more on Rio Rancho’s purchase). The city had no acquisitions in 2017, but in 2016, purchased 750.427 AF at prices ranging from $12,500/AF to $15,000/AF, with an average price of $14,658/AF. As result, Rio Rancho is ahead on its water purchase obligation.

With ABCWUA’s policy objective to find other sources to meet demands, and Rio Rancho is comfortably ahead of schedule on the water purchase requirement under one of its permits, the once emerging market for pre-1907 Middle Rio Grande surface water rights has declined to near non-existence. JOW will report future purchases of these rights as individual transactions in the Transaction Spotlight.