At its December meeting, the Board of Directors of the Metropolitan Water District of Southern California approved adjustments to its Water Supply Allocation Plan (“WSAP”) for allocating water supplies to its member agencies in times of declared water shortages.  The original WSAP was adopted in February 2008 and implemented from July 1, 2009 through June 30, 2011 when Metropolitan’s storage levels had fallen to low levels during drought conditions.

The staff notes that Metropolitan managed to avoid declaring a water shortage in 2014 by drawing down its water storage.  But circumstances may be changing:  “prudent management of remaining storage if severe drought conditions continue into 2015 will likely result in Metropolitan imposing mandatory supply allocations.”

The WSAP is a “needs-based” method that uses financial incentives for water conservation.  A baseline is established by the difference between retail water demands in a member agency’s service area and local supplies.  Under the original WSAP, a Penalty Rate was charged at two times the “fully encumbered” Tier 2 untreated water rate for water use between 100 percent and 115 percent of supply allocations and four times the Tier 2 untreated water rate for water use in excess of 115% of supply allocations (see table).

Incentives under Original and Revised WRAP

The interest-free amortization, of course, understates the actual economic cost of turf removal.  Using a 5% interest rate (that reflects long-term yield on 10-Year Treasury notes and a 50 basis point risk premium), the annual cost of turf removal for a 10 year amortization period is $1,918/AF, or $438/AF higher than the interest-free amortization (see figure).  Therefore, basing the Allocation Surcharge on the cost-of-service of additional water conservation would support even greater financial incentives in the WSAP.  If turf removal programs prove water savings last longer than 10 years, then the annual cost of water conservation from the one-time payment to homeowners would fall considerably. 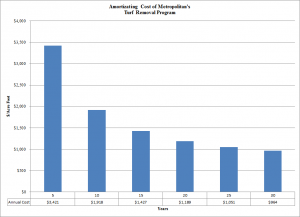 The allocations adopted by the Board are starting points for member agencies.  Using FY 2012-13 and FY 2013-14 as the base period will require Metropolitan staff to make adjustments for mandatory use restrictions or rationing during these years.  Staff will also update the method for calculating the “demand hardening” from conservation efforts.  There will also be consultations with member agencies regarding groundwater replenishment for meeting groundwater management objectives and consideration of severe and/or inequitable financial impacts.