At the 2015 Annual Meeting of the Colorado River Water Users Association, Deputy Secretary of the Interior Mike Connor outlined two major objectives regarding the Colorado River Basin for the last year of the Obama administration:

In December 2007, Secretary of the Interior approved Colorado River Interim Guidelines for Lower Basin Shortages and the Coordinated Operations for Lake Powell and Lake Mead. When the January 1st elevation of Lake Mead falls within the triggers defined below (as projected by the August 24-Month Study), cutbacks in available Colorado River water are as provided below. At the time the shortage criteria were established, Bureau of Reclamation analysis concluded that there was only a remote chance (say 3% probability) that the elevation of Lake Mead would fall below 1,025 feet.

Circumstances have deteriorated since 2007. The January elevation of Lake Mead peaked in the year 2000 at 1,214 feet (see chart). Since then, Lake Mead’s elevation has been declining steadily reflecting the 15-year run of lower flows on the Colorado River than experienced in the 20th Century. When the shortage declaration criteria were adopted, Lake Mead elevation stood at 1,116 feet, more than 100 feet above the trigger elevation. Since then, Lake Mead elevation has continued its downward spiral that was only interrupted by a large runoff on the Colorado River Basin in the year 2012. Lake Mead now stands at its lowest elevation since 1937 when Lake Mead was being filled. The Bureau of Reclamation now projects that the probability of Lake Mead’s elevation falling below 1,025 feet is now 30%. 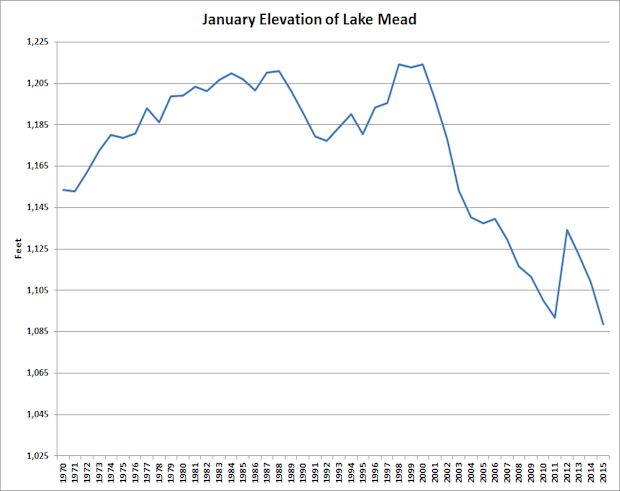 Within this context, Mr. Connor stated that a high priority of the Obama Administration is to address the increased risk of Lake Mead elevation falling below 1,025 feet. According to the 2011 Lake Mead Capacity table, the amount of water in storage at 1,025 feet is about 6 million AF, or about 1 million AF less than the amount of water allocated to the Lower Basin States under the 2007 shortage guidelines.

While there would undoubtedly be inflows into Lake Mead between the August 24-Month study and January of a year the 1,025 feet shortage trigger is met, there are two issues. First, inflows must be 1 million AF greater than projected for there to be 7 million AF of Colorado River water available for allocation. Second, in these emergency circumstances, it may not be prudent to “drain” Lake Mead and gamble the Lower Basin economy on annual inflows for the following year. In other words, as Mr. Connor explained, Lower Basin interests must acknowledge the significant potential risks and develop a risk management strategy.

While he did not use the “Black Swan Theory” of the role of rare events having significant historical impacts for which people are unprepared, this theory may prove applicable here. The Lower Basin is now finding itself in circumstances beyond the realm of normal expectations based on historical hydrology and analytic tools. The challenges will require imagination and creativity.

Look for the deliberations to focus on major issues. The first may involve a reduction in the allocation of Colorado River water at the existing trigger levels. The second may involve additional triggers when elevations fall below 1,025 feet. The third involves “how low” Lake Mead will go before California is reduced below its 4.4 million AF apportionment. With the Central Arizona Project’s junior priority, the question becomes what is the allocation of Colorado River water when less than 6 million AF is available for delivery. When will the Bureau of Reclamation turn to the present perfected rights recognized in the U.S. Supreme Court decision in Arizona v. California? How will these decisions be implemented within the U.S. obligation to deliver 1.5 million AF of Colorado River water to Mexico under the 1944 Treaty?

Mr. Connor stated that completion of a follow on minute to Minute 319 is a high priority for the last year of the Obama Administration. On a panel before Mr. Connor’s speech, representatives of the United States and Mexico discussed the status of bi-national discussions. The participants included Estevan Lopez, Commission of the Bureau of Reclamation, Edward Drusina, U.S. Commissioner, International Boundary and Water Commission, Dr. Roberto Salmon Castelo, Mexican Commissioner, International Boundary and Water Commission, and Victor Alcocer, Deputy Director, Mexican National Water Commission.

The participants reported on current progress under Minute 319, including environmental flows delivered to the Mexican Delta and lining of the Revolution Canal. Work groups are currently addressing a variety of potential projects, further environmental actions, and assessment of hydrology whose work product could be incorporated into the successor minute to Minute 319. The process is on a fast track. The deadline for full draft of Minute 32x is March 31, 2016. The deadline for the final form of Minute 32x is June 30, 2016. These deadlines have been established so that Minute 32x can be executed in the final year of the Obama Administration.

This schedule reflects the concern that a change in administration in the United States after the 2016 election will delay the ability of the United States to act before Minute 319 expires on December 31, 2017.