On heels of Governor’s drought emergency declaration, State Water Resources Control Board warns there might not be enough water to go around 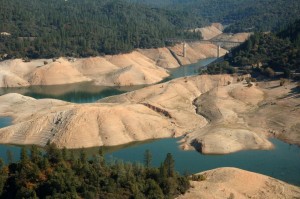 With reservoirs sitting barely over one-third full, the mountains practically bare and no precipitation in sight, the State Water Resources Control Board (State Water Board) issued the grim news that there may simply not be enough water to go around this year.

In a notice issued Friday, the State Water Board warned that if dry conditions persists, they will notify those water right holders with lower priority water rights that they must limit or even stop their diversions. Those in water short areas should be looking into alternative supplies, such as groundwater, contractually purchased water, or recycled water, the letter states, noting that groundwater resources are already depleted in some areas.

The right to divert water is based in part on when the right was initiated; in times of drought or limited supply, the most recent (or junior) water right holder must be the first to discontinue their use.  Even some riparian and pre-1914 water-right holders can be required to stop their diversions if they are located downstream of reservoirs releasing stored water, and there is no natural flow available for diversion.

The announcement came on the heels of the Governor’s official declaration of a drought emergency earlier that day.  “We can’t make it rain, but we can be much better prepared for the terrible consequences that California’s drought now threatens, including dramatically less water for our farms and communities and increased fires in both urban and rural areas,” said Governor Brown in a press release. “I’ve declared this emergency and I’m calling all Californians to conserve water in every way possible.”

Senator Dianne Feinstein praised the move, renewing the call for a federal drought task force.  “This week Congressman Costa, Senator Boxer and I called on President Obama to approve a federal disaster declaration as soon as possible and to appoint a drought task force to work with the state to mitigate the drought’s effects on the state. Now that the governor has issued the state declaration, I hope the president will act quickly to approve the federal declaration.”

Tunnel opponents used the occasion to call on Governor Brown to abandon the Bay Delta Conservation Plan.  “The governor’s tunnels are based on flawed and outdated assumptions that there is ‘surplus’ water to export,” said Barbara Barrigan-Parrilla, executive director of RTD. “We have had three dry years in a row and the governor admits the tunnels won’t add one drop of water to our drought-plagued state. We need solutions more appropriate to our future water challenges, not this $60 billion mega-project that would misspend the billions needed for sustainable water solutions.”

Congressman Garamendi and other Northern California legislators praised the Governor while urging him to look to new sources of water.   “Governor Brown did the right thing in declaring a drought emergency today. The state is desperate for relief from these drought conditions, and the Governor’s prompt action helps,” states the letter.  “We can’t think of a clearer reason why the state and nation must invest in water recycling, conservation, and storage. These investments can create millions of gallons of new water for the state while creating good jobs. We urge the Governor to focus on creating new water through recycling, conservation, and storage in order to protect the state, family farms and businesses, and local municipalities that depend on a reliable water supply for their communities.”

State Assembly Republican leader Connie Conway said better late than never.  “This long-awaited drought declaration is more than a piece of paper – it’s a sign of hope and relief for the Valley farmers and workers who depend on water to feed the world,” she said. “While California still needs a long-term solution to ensure we have a safe, clean and reliable water supply, the drought declaration will definitely help in the short-term as the state enters a third consecutive dry year.”

ACWA’s Tim Quinn echoed the call for conservation and pointed out the need for the California Water Action Plan.  “We have a challenging year ahead of us that will require leadership, active water management by the state’s local water agencies, and the active engagement of all Californians,” he said.  “We all must do our part to save water. Longer term, the governor has called for a comprehensive plan to improve water supply reliability statewide. We stand ready to advance such a plan and the necessary investments to secure California’s water future.”