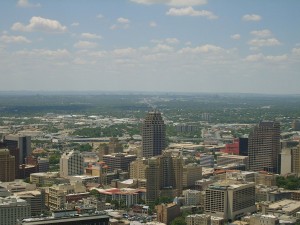 On September 29th, the Board of Trustees of the San Antonio Water System (“SAWS”) approved a contract with the Vista Ridge Consortium for the delivery of up to 50,000 acre-feet (“AF”) per year of groundwater from Burleson County, Texas starting in 2019.  The estimated annual cost of delivered water ranges from $2,000/AF to $2,307/AF depending on the prevailing interest rate included in the calculation of the fixed cost specified in the contract.  SAWS will also build interconnection infrastructure at an estimated cost of $100 million.

The Vista Ridge Consortium is a partnership between Abengoa (a Spanish-based water infrastructure company) and BlueWater Systems (an Austin-based company that assembled 3,400 leases of water rights from landowners as well as production and export permits from a local groundwater conservation district).  Abengoa will build and operate well-field infrastructure, a 142-mile water pipeline and transfer facilities.

The next step in the project involves approval by the San Antonio City Council.  SAWS anticipates seeking Council approval in October.  A “Commercial Close” will occur upon contract execution after SAWS and City Council approvals.  A “Financial Close” will occur once Vista Ridge secures third party project financing scheduled within 18 to 30 months.  Construction is anticipated to take 42 months.