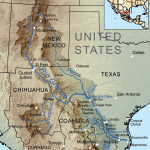 Members of the Texas Congressional delegation sent a letter urging President Obama and the U.S. State Department to intervene in the ongoing dispute over Mexican water allocations from the Rio Grande.  Under the 1944 Water Treaty between the U.S. and Mexico, Mexico is required to deliver to the U.S. an average of 350,000 acre-feet per year in five-year cycles.  As of this summer, Mexico was running a deficit of 361,000 acre-feet.  With the current five-year cycle expiring in October 2015, it seems likely that Mexico will not meet its obligations.  This is not necessarily a violation of the 1944 Treaty, which provides, “In the event of extraordinary drought…any deficiencies existing at the end of the aforesaid five-year cycle shall be made up in the following five-year cycle.”  It does, however, hurt Texas agricultural and municipal water users, costing hundreds of millions of dollars in lost productivity, according to a 2013 Texas A&M study.

In addition to pointing out the hardship under-allocation imposes on Texas consumers, the letter from the Texas delegation contends that the unpredictability of the Mexican deliveries is unfair compared to the U.S.’ consistent and predictable deliveries from the Colorado River.  The letter criticizes Mexico’s practice of allocating all its reservoir supply for domestic use, rather than delivering some to the U.S.

Citing frustration with the lack of progress of negotiations through the International Boundary and Water Commission, the organization tasked with enforcing the Treaty, the letter calls on the Obama administration “to bring the full weight of the federal government” to help ensure that negotiations will “yield more transparent and accountable deliveries of water to the U.S.”

A 2013 Congressional Research Service report noted that the predictability of Mexican deliveries to the U.S. is a contentious issue.  While many U.S. stakeholders (like the Texas delegation) think Mexico is “hoarding” water with its unpredictable deliveries, Mexican stakeholders point out that the U.S. gets considerably more water from the Rio Grande and the Treaty allows Mexico’s annual deliveries to fluctuate with supply.

According to the CRS, there has been some high-level intervention on issues relating to the Treaty.  The topic came up during President Obama’s trip to Mexico in May 2013, and has also been raised by the U.S. Ambassador.  The CRS report indicated that officials from both countries recognized the significance of the issue.  However, the recent letter indicates that Texas officials have been dissatisfied with the progress from these talks.

Texas lawmakers previously have attempted other methods to force more active federal intervention. In 2013, U.S. Senator John Cornyn (R-TX) and Representative Filemon Vela (D-TX) introduced legislation that would require reports to Congress on efforts by Mexico to meet delivery Rio Grande delivery obligations under the 1944 treaty and on the benefits that U.S. is receiving under Minute 319.  The bills, HR 1863 (introduced in May 2013), HR 2307 (introduced in June 2013) and S 1125 (introducted in 2013) remain in committee.  In addition, in November 2013, Sen. Cornyn and Rep. Vela penned a letter to IBWC Commissioner Edward Drusina hinting a possible funding cuts for Minute 319 if the IBWC does not take action to improve water deliveries from Mexico.