Commemorating the tenth anniversary of the Quantification Settlement Agreement with a look at the history, impacts and work remaining to be done

October 2013 marked the tenth anniversary of the Quantification Settlement Agreement (“QSA”), which was executed on October 10, 2003 and chronicled in a public ceremony six days later.  Like most anniversaries, the occasion passed without the fanfare of the original event—but the San Diego County Water Authority commemorated the occasion by reflecting on the history of the agreement and the water supply security it has brought to the region.

According to Dennis Cushman, Assistant General Manager of SDCWA, the QSA spurred from a 1991 water supply crisis.  Due to ongoing drought conditions, the Metropolitan Water District of Southern California (“MWD”) sharply reduced deliveries to the region, cutting them by 31%.  Because MWD provided 95% of the region’s water supply, the cuts underscored the region’s vulnerability and lead to calls for a more diversified water supply.

With leaders in the Imperial Valley wanting to preserve and protect senior Colorado River water rights and SDCWA needing to diversify its water supply, the Imperial Irrigation District (“IID”) and SDCWA reached a memorandum of understanding for a long-term conservation-and-transfer agreement in 1995.  But it would take eight years of wrangling over various points of controversy and overcoming challenges[1] before the QSA would be signed.  The Union-Tribune San Diego Editorial Board put it well in a recent editorial highlighting the water supply independence San Diego is enjoying as a result of the QSA, “Take a close look at that next glass of water from the kitchen faucet. Squint hard and you may see a reflection of the blood, sweat and tears it took to get it into your home.”

Since the implementation of the QSA, SDCWA has reduced its reliance on deliveries from MWD, who now provides about 46% of the region’s water supply and is projected to drop to 30% by 2020 (see chart). But there are matters still pending.  Shortly after the QSA was executed, lawsuits were filed challenging its validity.  The courts dispensed with the all of the challenges in July 2013, but appeals are pending.  On the Salton Sea, the state legislature has not taken action on a Salton Sea restoration project or funding plan—and IID and SDCWA have petitioned the State Water Resources Control Board to eliminate the obligation to provide mitigation water to the Salton Sea for 2014-2017 or to provide alternative habitat unless the state legislature or federal government has adopted and funded a Salton Sea restoration project.  The purpose of the petition is “create enhanced habitat and improved air quality mitigation for the water transfer,” while maintaining the financial viability of the QSA Joint Powers Authority.  Also in play, is a lawsuit filed by SDCWA against MWD over the rates charged for use of the conveyance facilities that SDCWA uses to transport Colorado River water to the SDCWA service area. 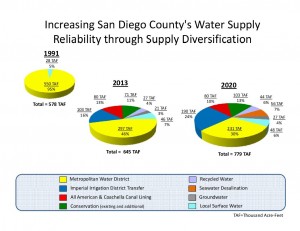 While most of the other entities involved in the QSA were quiet as the anniversary passed, IID General Manager Kevin Kelley joined Dennis Cushman in an interview with KPBS’ Maureen Cavanaugh on October 23rd.  While Cushman was sanguine in his discussion of situation before the QSA and the benefits it is providing, Kelley was more bearish, acknowledging that the QSA is important, but also stating that people see it as a “necessary evil” and expressing concern that there has been no substantive movement on the Salton Sea issue.  Kelley also noted that there is difficulty in implementing it, especially since the district must solicit willing sellers to make water available for the water transfers, which are increasing in volume.

[1] For an account of this process, see Truce on the Colorado River: A Retrospective reprinted from Water Strategist, October 2003.