A policy that requires developers in the Reno metropolitan area to dedicate necessary water to Truckee Meadows Water Authority (“TMWA”) to receive water service for their developments has created a market for Truckee River surface water rights. In early 2015, a consolidation of TMWA and Washoe County’s water department was completed, and TMWA is now the major water utility in the region.

When developers dedicate surface water to TMWA, they must pay a one-time water meter retrofit fee of $1,830/AF.  In addition to the 1 AF dedication per 1 AF of demand, they must also dedicate or purchase from TMWA an additional 0.11 AF per 1 AF of demand, which is required by the Truckee River Operating Agreement and used for drought storage—so developers dedicating surface water must dedicated a total of 1.11 AF per 1 AF of demand.  Developers may be required to dedicate additional water resources to make up for any return flow obligations of the rights they dedicated for demand. Groundwater can also be dedicated, though historically prices to do so have varied widely. Truckee River water rights trade at prices that depend on several factors, including water quality, location, and urban growth in the area. 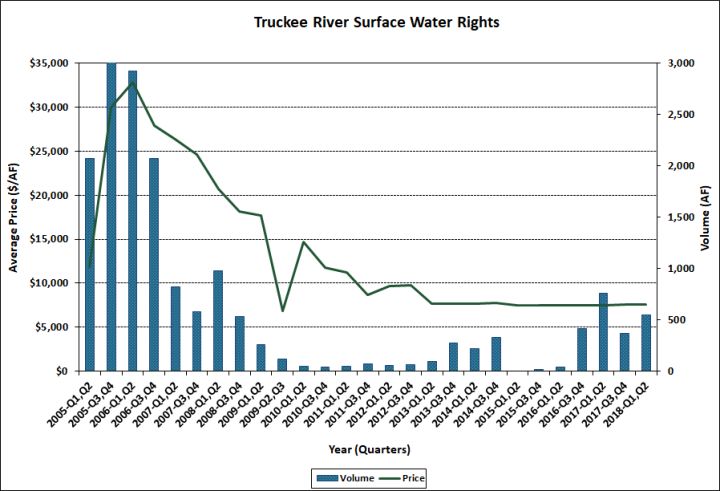 Northern Nevada saw a growth boom and corresponding run up in water market prices and activity in 2005 and 2006 but receded during the economic downturn of the late 2000s. While the development market has been slow to recover, the overall market trends show continuing movement toward pre-2005 activity levels.