On May 14, 2018, California through its Regional Water Quality Control Board, San Diego Region, and California Attorney General provided a 60-Day notice letter to Acting United States Commissioner to the International Boundary Water Commission (“USIBWC”) and Administrator of the Environmental Protection Agency (“EPA”) of the intent to sue USIBWC for violating the federal Clean Water Act. The controversy involves uncontrolled sewage flowing from Tijuana into San Diego County.

The system is designed to manage sewage flows during “dry weather” flows. When flows do not exceed the maximum design capacity of canyon collectors, properly maintained and operating collectors divert the flows to the SBIWTP for treatment and disposal through the South Bay Ocean Outfall. Any flows more than operating capacity of collectors continue flowing north to the border into the Tijuana River Estuary and the Pacific Ocean in the United States. These sewage flows result in beach closures at the cities of Imperial Beach and Coronado and interfere with Naval Training exercises.

California’s letter states eleven days of violations between April 19, 2015 and October 19, 2017 self-reported by the USIBWC. Spills totaled 11.86 million gallons. In three instances of spills, California alleges that USIBWC failed to collect samples and monitor for specific water quality parameters. On February 27, 2018, a spill of approximately 54,000 gallons of waste, including untreated sewage, occurred at one of the collector systems (Goat Canyon) due to a temporary power outage. California also complains that USIBWC failed to implement required response plan to (1) control or limit the spill or transboundary wastewater flow volume, (2) terminate the spill or transboundary wastewater flow volume, and (3) recover as much of the spill or transboundary wastewater flow volume for proper disposal.

Anatomy of The Tijuana Sewage Challenge 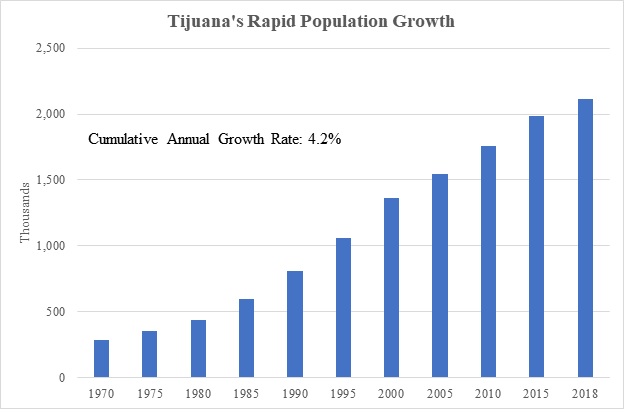 There are two critical aspects of the Tijuana sewage system that have a bearing on cross-border sewage flows. First, experts estimate that perhaps half of residences are not hooked up to the sewage system. Sewage from unhooked-up residences flow into Tijuana’s stormwater system. Second, sewage flows and stormwater flows are comingled. During “wet conditions” high flows on the Tijuana River include high sewage loads crossing into the United States because the SBIWTP shuts down operations. With a treatment capacity of 25 million gallons per day, shutting down the plant during wet conditions contributes to the flow of sewage into the United States.

There are other initiatives seeking to address the Tijuana sewage issue. The Binational Core Group established in 2015 under Minute 320 is charged with identifying projects that address pollution and sediment issues in the Tijuana River Valley basin. The North American Development Bank is funding a feasibility study (“Tijuana River Diversion Infrastructure Study”) to provide a diagnosis of transboundary flows in the San Diego region. The study will identify potential operational improvements and infrastructure upgrades in both the United States and Mexico. This study is expected to be completed this December.

Finally, the Mexican non-governmental organization Tijuana Innovadora has launched the Tijuana Verde Citizen Observatory Initiative. The objective is to provide a framework for forming a regional consensus on sewage projects and programs on both sides of the border. A proposed website will be a valuable tool for providing transparency and credible information on sewage problems and solutions. The proposed public outreach program will provide a forum for public discourse and input for studies and projects sponsored by US, Mexican or binational entities, including the North American Development Bank. A proposed technical committee will provide third-party, peer review of studies and projects. Tijuana Verde supports development of funding mechanisms that reflect legal responsibilities of parties, rate-payers ability to pay and the economic benefits created by solving sewage issues in the region.

Editor’s Note: The author is assisting Tijuana Innovadora develop the Tijuana Verde Citizen Observatory Initiative and is a member of its Technical Assistance Committee