Consolidated Water Company (CWCO) stock price is now 39.5% above its expected price.  The stock price now stands at 2.3% above the level prevailing 52 weeks ago. The stock price stands slightly above the 10-week exponential moving average.  The recent run-up in price reflects anticipation that the company’s consortium would be selected by the State of Baja to construct a 100,000-AF/year seawater desalination plant at Rosarito Beach. Consolidated was part of the consortium selected by the State of Baja. 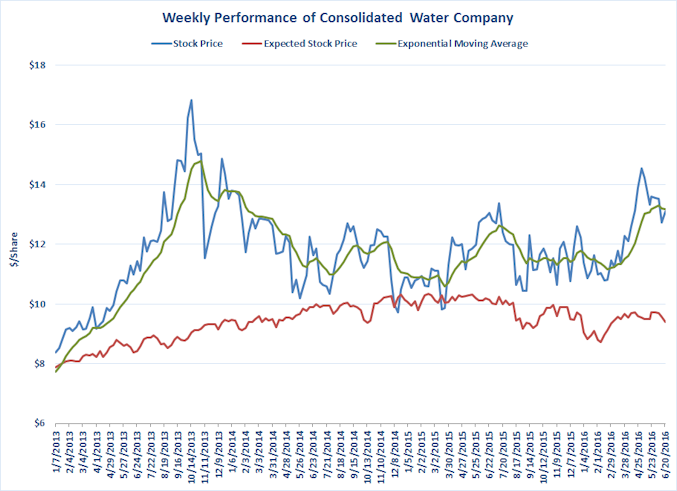 The price jump in early spring followed a public story regarding a successful demonstration by BioLargo validating the company’s technical claims that their AOS filter costs 1/20th the nearest technical competitor, with greater than 100 times the efficacy (disinfection) and greater than 10 times faster than any technical competitor. Consolidated was identified in a wire story as a potential beneficiary from adoption of the AOS filter in its desalination projects.

The stock had been on an upward trend thanks to the bump in its stock price in mid-March 2015 following an SEC 8k filing stating that it has found an equity partner for a 100,000-AF desalination plant at Rosarito Beach. It also stated that it anticipates entering into a definitive agreement with the State of Baja by February 2016.