Cadiz (CDZI) stock price has continued rising but remains below the level before the release of a letter dated October 2, 2015 by the Bureau of Land Management determining that the Cadiz Project is not within the scope of the Arizona-California Railroad right-of-way over federal lands. If the determination stands, BLM believes that the Cadiz Project would need BLM approval for a right-of-way over federal lands for the project’s water conveyance pipeline. (For background on the BLM determination, see “BLM Determines that Cadiz Project Needs Federal Approval,” JOW October 2015).

The price now stands 2.3% above the price 52 weeks ago but 41.2% below its expected price. The stock price is 94% of its 10-week exponential moving average. Prior to the lease announcement, the price had moved up on the news that the company had rolled over its debt with creditors.

CDZI stock had been underperforming relative to the returns forecasted by the Capital Asset Pricing Model by an annual rate of 6.1% from January 2006 through December 2012. The Company announced a comprehensive refinancing package in March 2013 to accommodate project financing for the Cadiz Valley Water Conservation, Storage and Recovery Project. The project faces litigation challenges, although the Company was successful in securing dismissals or settlements in mid to late 2013. The company also secured further working capital from an agreement with a senior lender in October 2013. The turnaround in the company’s stock in the latter half of 2013 has closed the gap of stock performance relative to expected prices (projected by the Capital Asset Pricing Model adjusted by historical under performance). 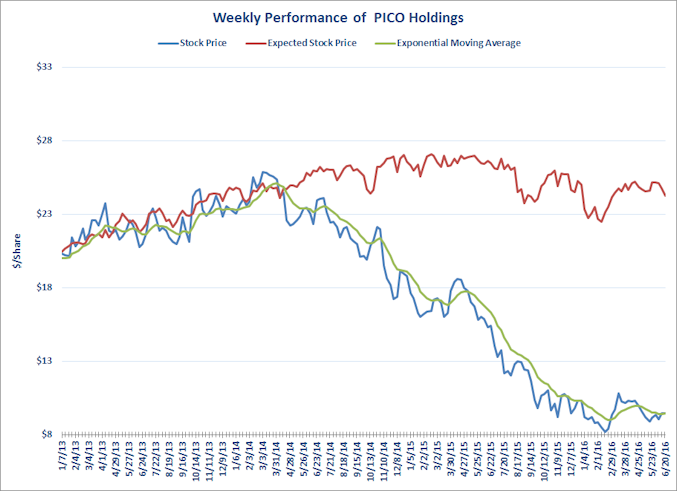 PICO Holdings (PICO) stock price has remained above its low reached in February of this year. The price now stands 61.0% below its expected price. The company is suffering losses in its three major business segments: water resources and storage, agribusiness and real estate. PICO’s price has declined by one-third over the past 52 weeks.  A price turnaround last April, which proved temporary, may have been prompted by the announcement that the firm has retained an investment banker to monetize its investment in Northstar (canola operations), one of the sources of operating losses. The price is at the 10-week exponential moving average. How far will the stock turnaround?