On February 24th, the Department of Water Resources increased the estimated State Water Project Allocation to 30%, although it warned that extended dry weather could force a reduced allocation.  This is the third announcement concerning the department’s estimated Table A allocation, starting at 10% last December and increased to 15% in late January.

DWR’s current announcement is in accord with the Journal of Water’s predictions for the 2016 Final Allocation.  Updating JOW’s forecast for the 2016 Final Table A Allocation for actual precipitation as measured by the Northern Sierra 8 Station Index through January, the expected final allocation is 29% (see Probability Distribution Chart).  There is about a 50% chance that the Final Table A Allocation will be less than 30%. 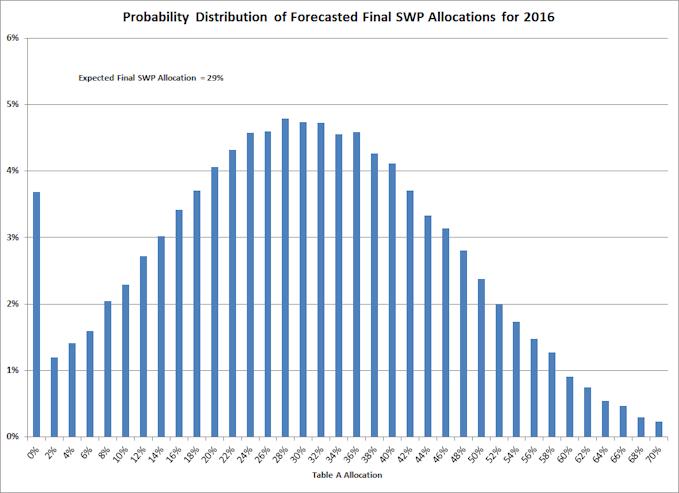 There are two wild cards to keep one’s eye on as we wait for the Department of Water Resources’ determination of the Final SWP Allocation for 2016.

In the end, there is much uncertainty surrounding the outcome. JOW will update the predictions monthly for actual precipitation through April.