When the Texas legislature passed the Edwards Aquifer Authority Act in 1993 establishing the Edwards Aquifer Authority (“EAA”) to manage the aquifer and setting a pumping cap (which was increased by SB 3 in 2007), a tradable commodity was born. Water withdrawn from the aquifer must remain in the boundaries of the EAA, but permits may be permanently transferred or leased among permit holders. Though, irrigators are limited to leasing no more than 50% of their permitted rights, and water cannot be moved from points west of Cibolo Creek to points east of the creek.

Prices for permanent transfers of Edwards Aquifer pumping permits climbed dramatically through 2006, when they reached $5,000/AF. Since then, prices worked their way up to $5,500/AF, and they largely remain there. Over the last three years, prices ranged from $5,342/AF to $5,712/AF. (see chart) 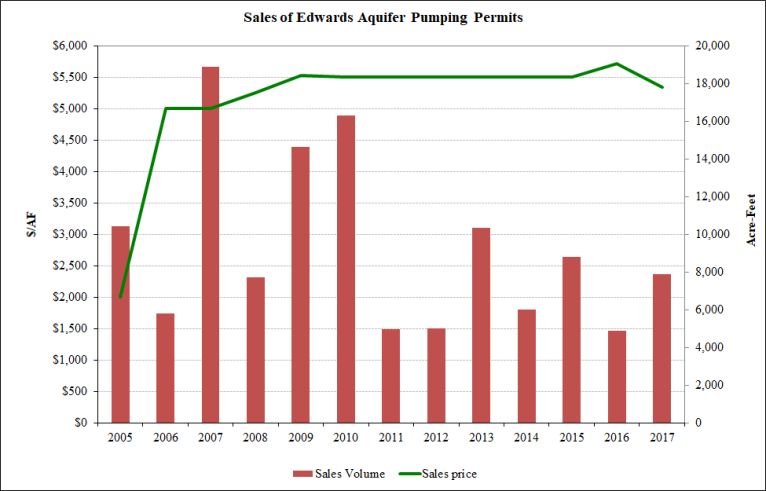 In contrast, prices for leases of permitted withdrawals have moved only slightly over time, ranging from $100/AF to $158/AF—save for a jump to $218/AF in 2008, which was driven by a very high-priced lease of industrial water. Without that transfer, the average price that year would have been $134/AF. The last three years have seen prices fluctuate between $115/AF and $158/AF.

Annual variations in the volumes for both permanent transfers and leases track with hydrologic conditions. In 2013, the year with the highest volume of leases and a high volume of sales, the region faced extremely dry conditions, prompted EAA to impose Stage III pumping restrictions in the San Antonio Pool for the second time ever. The declaration meant that pumpers in that pool had to reduce withdrawals by 35%. 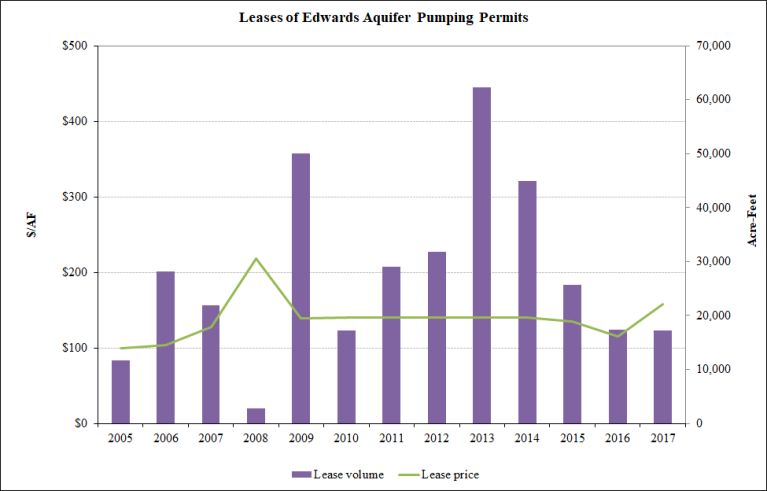 In addition to the market transfers among individuals, EAA has two programs that pay pumpers for habitat conservation efforts. Both programs are part of the Edwards Aquifer Habitat Conservation Plan finalized in 2012. Under the Voluntary Irrigation Suspension Program Option (“VISPO”), irrigators can enroll in a program that will pay them to forego pumping if the J-17 well is at or below 635 feet on October 1. An irrigator can enroll for a 5-year term or a 10-year term, and payment structure varies by the length of the term. Under EAA’s Aquifer Storage and Recovery Leasing Program (“ASR Leasing Program”), EAA leases water from pumpers to “minimize the impacts of incidental take through extended drought.” EAA has a goal to lease 50,000 AF and pays $120/AF for one-year leases, $140/AF for five-year leases, and $160/AF for 10-year leases.

Forecasts anticipate that south Texas will see hotter-than-normal temperatures and drier-than-normal precipitation this summer, and the San Antonio Pool is currently under Stage 2 restrictions, which imposes a 30% reduction in pumping. Expect activity to increase.