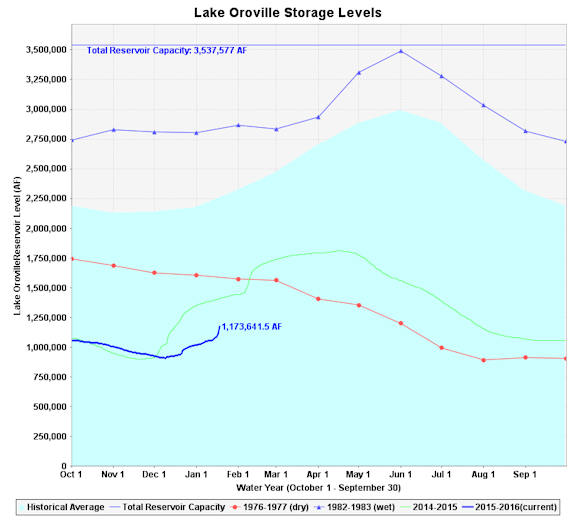 Driven by storms in December, Lake Oroville, the primary storage reservoir for the California State Water Project, began to increase and ended December at 29% of the reservoir’s total capacity or 47% of the historical average level for the date. While storage levels are increasing in January, they continue to lag behind both last year and the 1976-1977 dry period (see chart).

Recent storms have been attributed to El Niño. Coming into the rainy season, forecasters assigned high probabilities to the likelihood of wet conditions in Southern California, and said that wet conditions are more likely than dry conditions in Northern California. But snowpack levels and the impact of El Niño conditions on storage levels—the primary factors affecting DWR’s SWP allocation—remain in question. DWR announced an initial allocation of 10% on December 1st and noted that the allocation could increase or decrease depending on the amount of precipitation received. (For an update on the impact of recent precipitation on the forecasted final SWP allocation, see “December Storms Double Forecasted 2016 Final SWP Allocation,” in this issue).