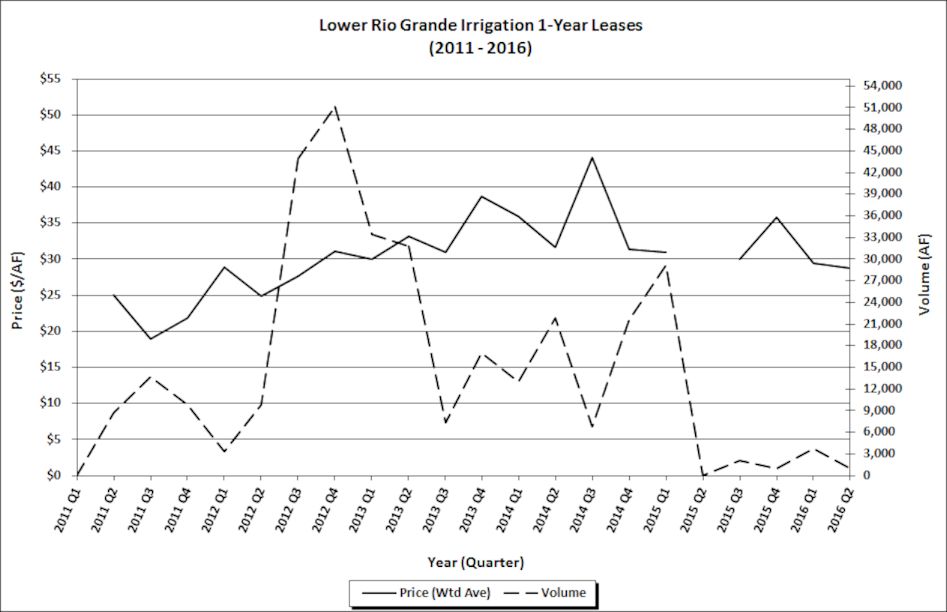 Because municipal users have priority in the system, the market for leases of municipal water is usually thin. Activity for industrial use and mining is also limited. In the second quarter, there were two leases for municipal water total 120 AF at a price of $65/AF. A total of 4 AF were leased for mining use at a price of $100/AF.

When dry conditions resumed after the 2009-2011 wet period, so did leasing activity. The market peaked in the 4th quarter of 2012 with irrigation leases totaling 51,183 AF for just that quarter, and trading remained high—rivaling or exceeding the amount of activity seen during the drought of the late 1990’s.

If past behavior is the best indicator of future behavior, a similar pattern can be expected this time. However, a new question has emerged regarding whether Mexico’s repayment of its water debt under the Rio Grande Compact shores up supplies enough to impact market activity. (For more on Mexico repaying its Rio Grande Compact water debt, see “Mexico Retires Rio Grande Water Debt in Full,” JOW March 2016). Will higher leasing activity and higher prices return with drier hydrologic conditions?