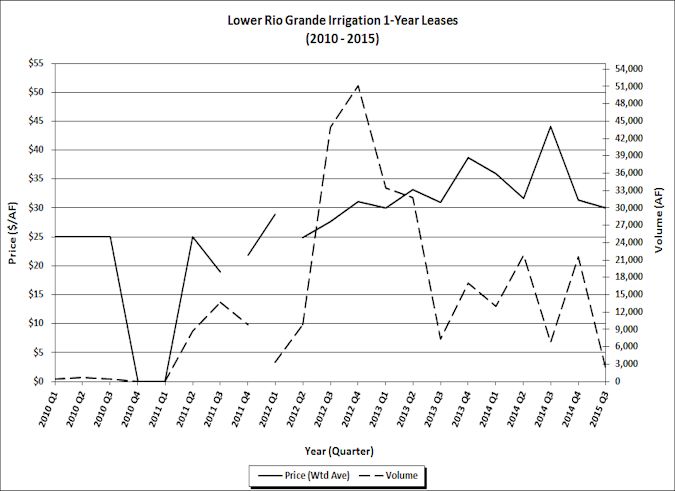 Because municipal users have priority in the system, the market for leases of municipal water is usually thin. Activity for industrial use and mining is also limited. In the 3rd quarter, there were six leases of municipal water totaling 690 AF with an average price of $64/AF. A construction company leased 1 AF for industrial use at a price of $100/AF, and there were five leases totaling 2,035 AF for mining use with an average price of $151/AF.

When dry conditions resumed after the 2009-2011 wet period, so did leasing activity. The market peaked in the fourth quarter 2012 with irrigation leases totaling 51,183 AF for just that quarter, and trading remained high—rivaling or exceeding the amount of activity seen during the drought of the late 1990’s.

As drier hydrologic conditions return, expect activity and prices to return to a high level, especially if Mexico continues amassing a water debt under the Rio Grande Compact. (For more on Mexico’s failure to satisfy its obligation to provide an average of 350,000 AF per year over five-year cycles, along with discussion of a potential solution, see “Texas Laments Unreliable Water Deliveries from Mexico,” Rodney T. Smith, Hydrowonk Blog, February 11, 2015.)