Record-breaking rainfall and flooding in the spring of 2015 led to a similar situation depressing leasing activity for 2015. The low level of activity continued in 2016, when the March-to-May rainfall totaled 200% to 300% of average for much of the valley. Only 10,359.84 AF of irrigation water changed hands over the year—less than 10% of the annual volume for 2012, the highest year on record. Autumn and earlier winter 2017 was hot in the Rio Grande Valley, with record or near-record temperatures throughout the season. A major storm in early October brought temporary relief from the moderate to severe drought conditions in the region, and another storm in mid-November brought a deluge—with some areas seeing as much as three times the monthly average rainfall in just a few hours. While there was little meaningful precipitation otherwise, these two storms brought enough precipitation to break the trend of a continuing pick-up in trading. 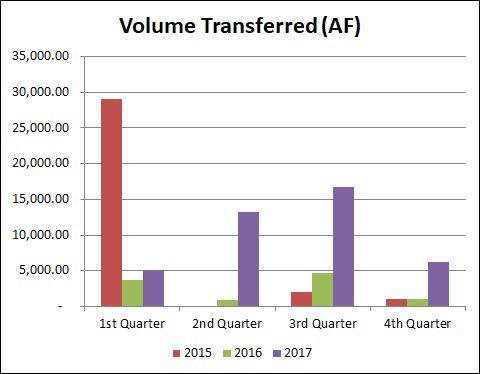 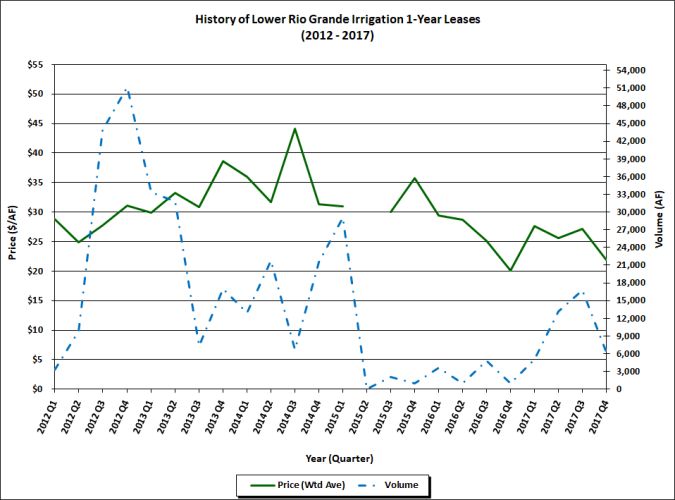 Because municipal users have priority in the system, the market for leases of municipal water typically is thin. In the fourth quarter 2017, there was an unusually large amount of municipal activity with 12 transfers totaling 6,880 AF. Prices ranged from $14.40/AF to $65/AF, with an average price of $32.87/AF.

Activity for industrial use and mining is also limited. The fourth quarter saw no leases for mining purposes.

The Lower Rio Grande Valley saw unusually hot temperatures and limited precipitation through most of 2017. Forecasters have near certain expectations for La Niña conditions to persist throughout the winter—which would lead to warm temperatures and worsening drought. Expect trading to resume.