Record-breaking rainfall and flooding in the spring of 2015 led to a similar situation depressing leasing activity for 2015. The low level of activity continued in 2016, when the March-to-May rainfall totaled 200% to 300% of average for much of the valley. Only 10,359.84 AF of irrigation water changed hands over the year—less than 10% of the annual volume for 2012, the highest year on record. The end of 2018 was marked by frequently changing conditions. But there were more warmer-than-average periods than colder-than-average periods. 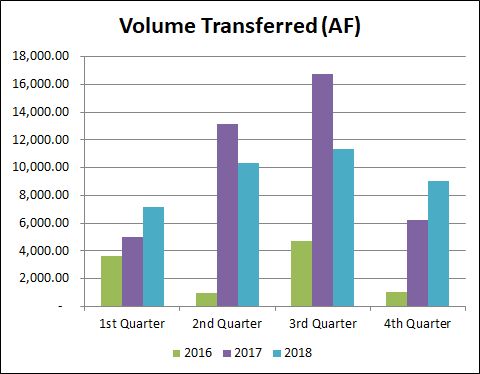 Activity increased in the fourth quarter of 2018, compared to the previous three years, but is below the historic average. 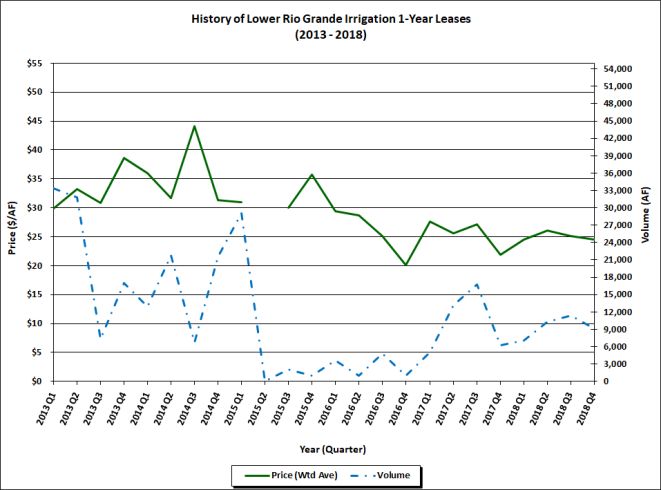 Because municipal users have priority in the system, the market for leases of municipal water is typically thin. Transfers of municipal water were unusually high in the fourth quarter, with 9 transfers totaling 1,635 AF at prices ranging from $35/AF to $65/AF. The average price was $43.49/AF.

There were no transfers for industrial use or mining during the fourth quarter.

While the fall gave the region a reprieve from drought, the winter saw volatile conditions that oscillated between both hot and cold extremes. While a weak or moderate El Niño was projected for the spring, forecasters also expected frequently changing conditions leaning hotter and drier, and the summer brought record high temperatures. Expectations for market activity are tied to how to irrigators react to frequently changing conditions, as well as how the season plays out overall.