On February 24th, the United States and Mexican Sections of the International Boundary and Water Commission announced that Mexico has delivered sufficient water to the United States to cover its Rio Grande debt.  Under Section 2, Article 4(B) of the 1944 Treaty between the Republic of Mexico and the United States, Subparagraph (c) allocates to the United States “one-third of the flow reaching the main channel of the Rio Grande (Rio Bravo) from the Conchos, San Diego, San Rodrigo, Escondido and Salado Rivers and the Las Vacas Arroyo, provided that this third shall not be less, as an average amount in cycles of five consecutive years, than 350,000 acre-feet (431,721,000 cubic meters) annually” (emphasis added).

The recently extinguished debt had accumulated over the five-year period ending on October 24, 2015 and totaled 263,250 acre-feet (see chart).  Mexico delivered water to the United States to pay down the debt with final deliveries made on January 25, 2016.  The treaty requires that any debt that exists at the end of a five-year cycle be paid in the following five-year cycle. 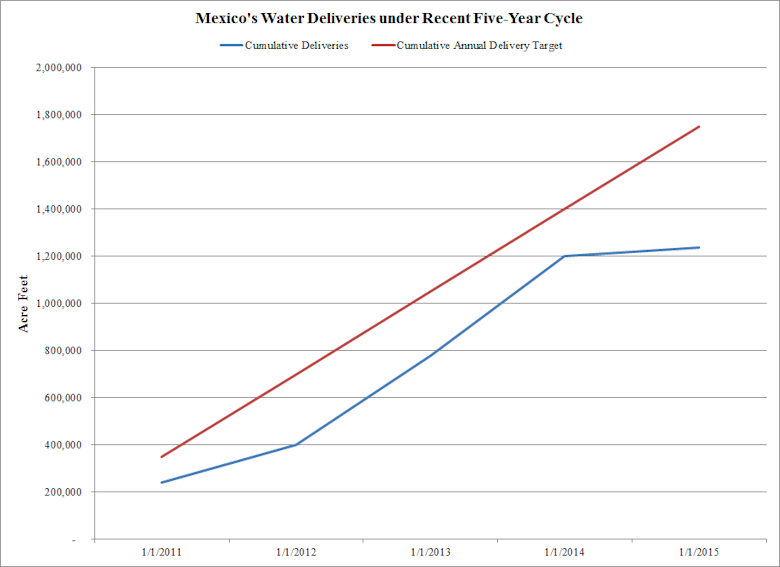 “This success exemplifies the cooperation that now exists between the United States and Mexico to address the water needs of both countries,” said U.S. Commissioner Edward Drusina.  “Water debts may at times be unavoidable but all water owners along our common border need to have annual notifications of how much water they can expect to receive the next year in order to plan accordingly.”

Do Mexico’s water deliveries bring an end to a long-standing dispute between Texas and Mexico?  Texas argued that the treaty requires a minimum annual delivery of 350,000 acre-feet except in extraordinary drought conditions.  (See “Texas Laments Unreliable Water Deliveries from Mexico,” Hydrowonk Blog, February 11, 2015). Texas’s position ignores the clause “as an average amount in cycles of five consecutive years” between “shall not be less” and “than 350,000 acre-feet annually.”  Many, including the U.S. Department of State find the word “annual” to provide the time dimension to the 350,000 acre-foot number stated in the 1944 Treaty.  From this perspective, whether Mexico has a “water debt” is determined at the end of each five-year period.

From a water supply reliability perspective, Texas’s Rio Grande water supply is problematic as it rests on a volatile hydrology (see chart on conservation storage at Amistad-Falcon).  The reservoirs were below 50% capacity from 1996 through 2003.  U.S. storage increased substantially from 2003 through 2008 while Mexican storage lagged.  U.S. storage ran up to 100% of capacity in 2008 and then declined to 80% through 2011, when storage in the U.S. and Mexico bounced back to 100%.  Storage was in a free fall with the onset of drought conditions and only recently recovered with more favorable hydrologic conditions.

With Mexico’s water debt resolved for the five-year cycle ending in 2015, look for the opportunity for further binational cooperation in water resource management.  The parties are developing better hydrologic tools and analysis that could support new cooperative ventures.  The fundamental challenge is how to improve water resource management in the face of the underlying volatility of hydrologic conditions.