Wall Street is increasingly turning to the water industry as a potential “resource play” for investors.  On June 1, 2015, for example, TheStreet.com ran an article “3 Water Utilities to Buy Amid California Drought.”  The premise is that “the utility industry is facing serious challenges, however, such as water scarcity, increasing cost of supplying safe and reliable water, financing and building advanced metering infrastructure.” All true.  It continues, “Just as important is the challenge of educating the public that it will have to pay more for water.”  This is very true.  What is missing is how to infer an investment opportunity from California’s drought for regulated utilities.

The immediate impact of California’s drought is state mandatory restrictions on municipal water use.  How will the 25% reductions in water sales impact a water utility?  With price regulated by the California’s Public Utilities Commission (“CPUC”), a water utility’s water rates are set to generate sufficient revenues for the anticipated level of water sales to meet a revenue requirement based on the operating and capital costs of the water utility.  When water sales are less than anticipated, actual revenues will prove insufficient to cover the “fixed cost” of the water system.  For further discussion, please see “On Water Conservation and Water Rates”, JOW April 3, 2014.

TheStreet recommended three water utilities as well-positioned to take advantage of California’s drought.  Ironically, JOW tracks two of the water utilities, American States Water (NYSE: AWR) and American Waterworks Company (NYSE: AWK) in its Capital Markets section.  The charts below show the weekly stock price of these companies since January 1, 2013 in comparison to the Expected Price based on the Capital Asset Pricing Model (for technical discussion, see Capital Markets).

For American States, the stock enjoyed a brief period of an over-performing stock in early March 2014 when Zack’s issued a “strong buy” opinion on the company.  Generally speaking, AWR’s stock price has moved as it has historically with the stock market.  AWR has been a stronger performer before 2013, as it has outperformed returns forecasted by the Capital Asset Pricing Model by 8.2% annually from January 2006 through December 2012.  By tracking its Expected Price since 2012, AWR’s superior stock market performance pre-dates California’s Drought. 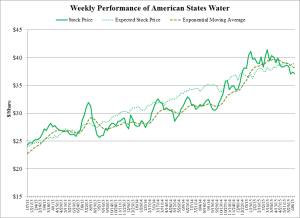 The situation of American Water Works is different.  The company’s stock price is 18.9% below its expected price.  The price peaked in December 2014.  The lagging price performance coincides with an announced decline in revenue from above average rainfall and cooler temperatures in its service areas in 2013.  Since then, the price has increased in tandem with its expected price, although at a lower level.  A public filing by BlackRock, who now owns 10% of AWK bumped the price temporarily in January 2015. 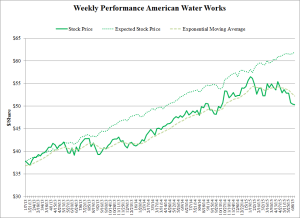 Like AWR, American Water Works was a strong performer before 2013, as it outperformed returns forecasted by the Capital Asset Pricing Model by 12.3% annually from January 2006 through December 2012.  With the fall-off in performance since 2012 relative to its expected price, AWK has been unable to sustain its earlier superior performance.

In sum, American States Water and American Waterworks stock performance is not at all consistent with the premise that the California Drought will be a positive driver for water utility stocks.  If anything, the mandatory state water restrictions will have the opposite effect.  The potential upside will be down the road as water utilities make new investments that pass CPUC muster.  Betting on how the CPUC will react to innovation in the water industry may be a long-term play.