On February 3rd, the Texas Water Development Board (“TWDB”) released a study on indicators for early drought warnings in Texas.  “I am proud of the critical component of water science at TWDB,” said TWDB Chairman Carlos Rubenstein.

The study provides a prediction in the spring of potential droughts in the summer.  The most accurate forecast of drought conditions in July are based on information in April of the following technical criteria:

The study’s Figure 4 illustrates the predictive power of the drought indicator.  For the period 1982-2014, the observed measure of precipitation for July generally tracks the predicted value (56% of the variation in observed precipitation is explained by variation in the predicted value—the percentage of variation explained equals the correlation squared).  There were two extreme droughts in this time period: 1984 and 2011.  The drought indicator for those years suggested a precipitation deficit, although not of a sufficient amount to indicate even a moderate drought.  The prediction for 2009 was the largest deficit for the time period, suggesting a “moderate drought.”  However, the observed precipitation in 2009 was normal.  As the study observed, the model captures whether July will turn out wet or dry, “although the severity of the events is not captured as well.” 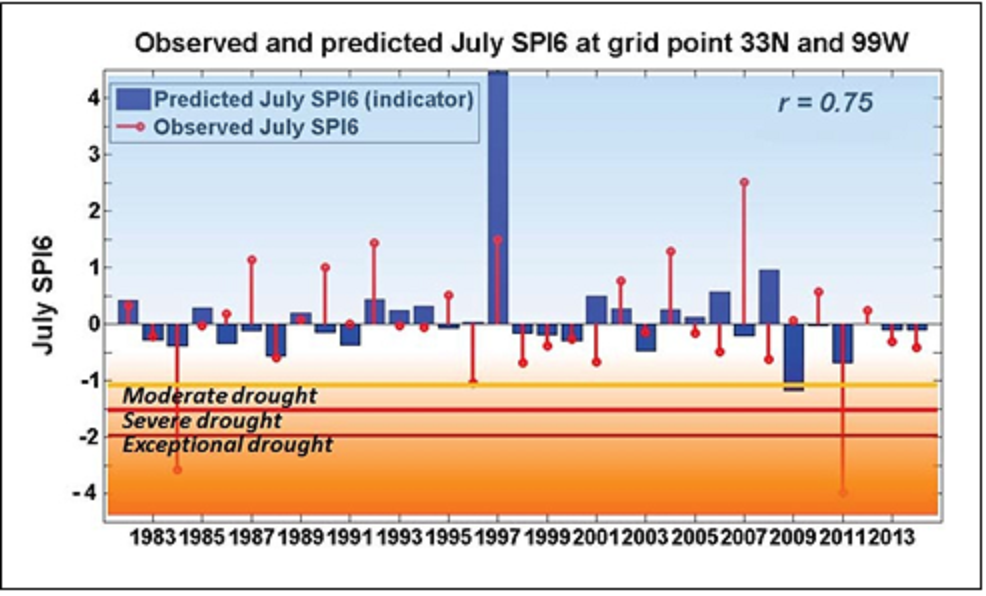 Figure 4: Time series plot of observed (blue bar) six-monthly Standardized Precipitation Index for July (July SPI6) and indicator-predicted July SPI6 at the grid point 33⁰N and 99⁰W for the period 1982-2014. The correlation coefficient between the two time series is depicted as r.

The drought indicators are a good first step in improving the information available to water decision-makers.  “Hydrology matters.”  Incomplete information is better than no information.  The efforts launched by the TWDB are the start of a new “cottage industry” in water resources.  How can information available about current hydrologic conditions be used to forecast future hydrologic conditions?  For another use of statistical models to predict available water supplies, see “CA Department of Water Resources Increases 2015 SWP Allocation to 20%” in this month’s issue.