The Bureau of Reclamation Releases Moving Forward Phase I Report

On May 12, 2015, the Bureau of Reclamation issued its Moving Forward Phase I Report on opportunities and potential actions to address future water supply and demand imbalances projected by the 2012 Colorado River Basin Water Supply and Demand Study.  The Phase I Report produced twenty-five opportunities identified by three workgroups (municipal & industrial, agriculture, environmental and recreational flows) for funding, incentives, data and tools, outreach and partnerships, coordination and integration, infrastructure improvements and flexible water management.  Phase II of the effort, due later this year, will select and implement pilot projects.

The Phase I Report compiles baseline information to provide a context for assessment of opportunities and potential actions.  Increased conservation, efficiency and reuse are critical parts of proposed actions (see table).  There is also a role for economic incentives and market mechanisms.  What is missing is any indication of funding sources—water users, taxpayers or parties who benefit from proposed actions.

Opportunities for Potential Future Actions
(order does not imply prioritization) 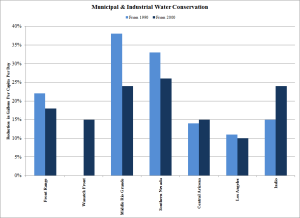 Second, there have already been significant investments in reuse.  By 2012, the major metropolitan areas in the Colorado River Basin had developed 328,400 AF of non-potable reuse and another 379,600 AF of indirect potable reuse of water for a total of 708,800 AF.  The areas of greatest development (relative to potential) were Middle Rio Grande, Southern Nevada, Central Arizona and the Front Range (see chart below).  Southern California and the Wastach Front are areas with untapped potential. 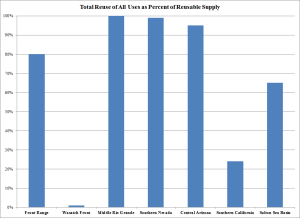 Like many, JOW awaits the next phase in Reclamation’s process where pilot programs will be selected and implemented.  Given all the actions already implemented throughout the basin, in terms of water conservation, reuse and transfers, what will be the new “R&D” behind the pilot programs?  Perhaps the greatest potential for progress will be in the area of environmental and recreational flows, which has historically lagged behind activities in municipal, industrial and agricultural water use.