High precipitation this winter has significantly reduced the chances of a Lower Basin shortage in the next 4 years.

2016 saw historic lows in the elevation of Lake Mead. Elevations dropped below 1,075 feet in May, June and July—with a low of 1,071.64 feet in June (see chart). While there has been a trend of progressively lower “highs” in successive winter elevations and lower “lows” in successive summer elevations over the last several years, the degree of the drop increased concern about the possibility of a shortage declaration for 2017. Under the 2007 Interim Guidelines, a shortage is declared if the Bureau of Reclamation’s (“Reclamation”) August 24-Month Study projects that Lake Mead’s elevation will be less than 1,075 feet the following January. 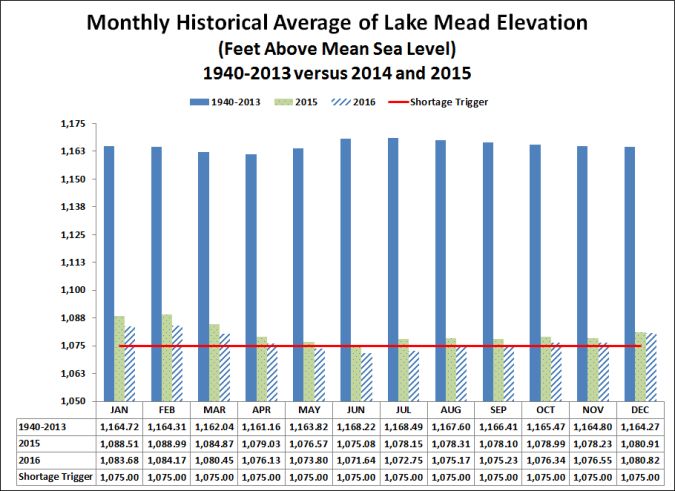 In its August 2016 24-Month Study, Reclamation projected that the January 2017 elevation of Lake Mead would be 1,080.02 feet—about 5 feet ABOVE the level for a shortage declaration (see chart). While there would be no shortage for 2017, Colorado River Simulation System (“CRSS”) modeling projected a 48% chance of a shortage declaration for 2018. The subsequent three years saw even greater chances of shortage, with a 60% chance of any level of shortage in 2019 and 2020 and a 56% chance in 2021. 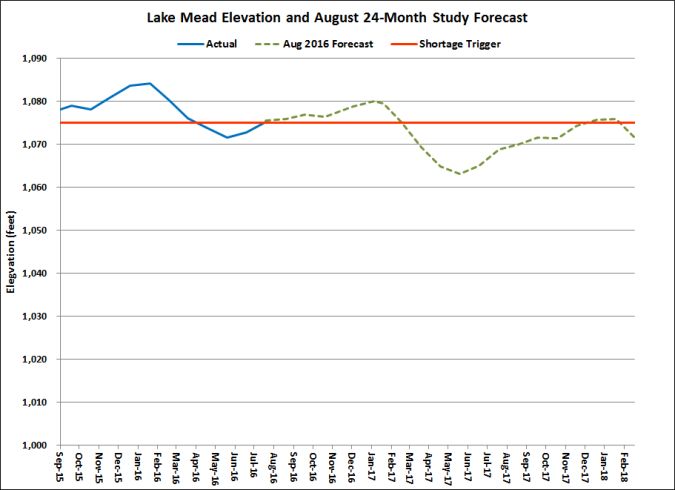 The movement of air moisture from the Pacific Ocean brought vital precipitation to the Colorado River Basin. Precipitation levels throughout the Basin ranged from 150% to 300% of average in December and 110% to 500% of average in January. The elevation of Lake Mead increased from 1,076.55 feet in November to 1,086.08 feet in January—more than 6 feet above the level projected in August. Conditions continued to improve through February, and the elevation of Lake Mead increased to 1,089.78 feet.

Modeling from Reclamation’s Mid-Term Probabilistic Operations Model (“MTOM”) and CRSS in January showed a significant drop in the chances of a shortage declaration. There is now a 34% chance of a shortage in 2018, and the April 24-Month Study projects an elevation of 1,085.07 feet for January 2018 (see chart). The subsequent three years have even lower chances of a shortage, with projections showing a 30% chance of any level of shortage in 2019, a 29% chance in 2020 and a 33% chance in 2021. 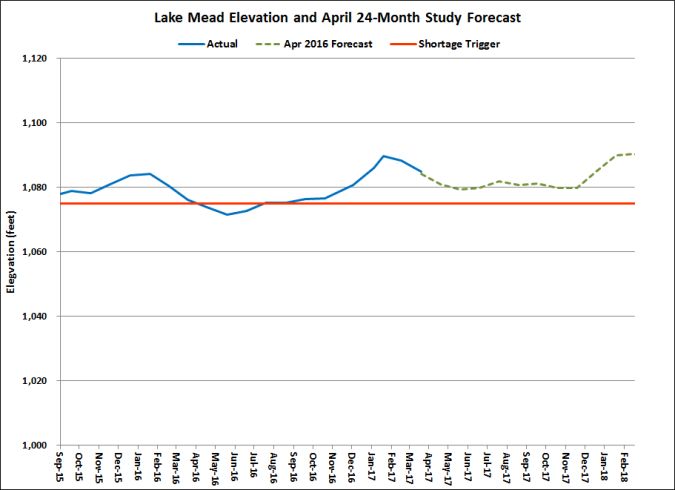 The drop in the chances of a shortage declaration are tied to improved inflows into Lake Powell based on the mid-January inflow forecasts. They do not consider planned but not-yet-realized efforts to further bolster Lake Mead’s elevation, such as Central Arizona Project’s conservation plans or Metropolitan Water District’s plans to create Intentionally Created Surplus (“ICS”).

While improved hydrologic conditions reduce the chances of a near-term shortage declaration, the Lower Basin is over-appropriated. Conditions will not turn around without addressing the 1.2 MAF per year structural deficit.